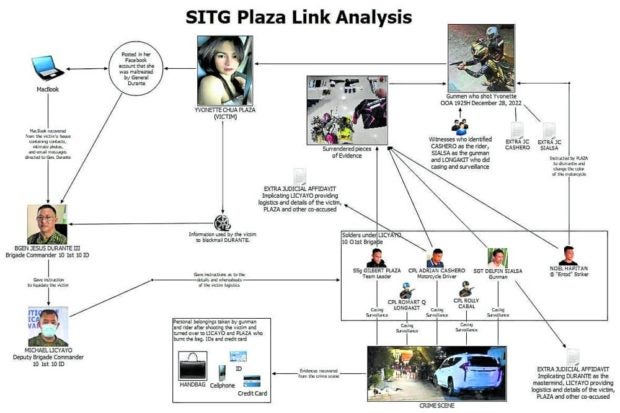 MATRIX OF MURDER | A diagram released by the Davao regional police illustrates the alleged plot and names the suspects in the Dec. 29, 2022, killing of Yvonne Chua Plaza.

CAMP CATITIPAN, Davao City, Philippines — The police have tagged an Army general who used to head the Presidential Security Group (PSG) during the Duterte administration as the mastermind in the killing last month of fashion model and businesswoman Yvonne Chua Plaza.

An official of the National Bureau of Investigation called the killing a “crime of passion,” citing the “relationship” between the victim and the general, a married man.

Complaints for murder and obstruction of justice were filed against Durante, 52, at the Davao City Prosecutor’s Office on Wednesday. The Philippine Army announced that he had been relieved as commander of the 1001st IB.

Licyayo and Plaza were included in the complaint for obstruction of justice, while Sialsa and Cachero were also accused of theft for taking Plaza’s handbag that contained her mobile phone, identification card, and credit card.

Brig. Gen. Allan Hambala, assistant commander of the Army’s 10th Infantry Division, said Licyayo, like Durante, was stripped of his position on Jan. 19.

Sialsa, Cachero, and Gilbert Plaza are now in the division’s custody, according to its spokesperson, Capt. Mark Anthony Tito.

Around 7:30 p.m. on Dec. 29, 2022, the 38-year-old Yvonne Chua Plaza was shot at close range moments after she got off a sport utility vehicle and as she was about to enter the house she was renting on Buttercup Street, Purok 18, inside Green Meadows Subdivision at Barangay Sto. Niño in Davao City’s Tugbok district.

She died on the spot from a gunshot wound in the head, police said.

The Inquirer tried to reach Durante by phone on Wednesday but the calls went unanswered.

On Jan. 1, or three days after the attack, Durante issued a statement denying involvement in the killing, saying he was being implicated only because of a social media post that Plaza made in April 2022. The post showed her face with bruises and cuts and named the general as the person who inflicted them.

Durante maintained that Plaza had since taken down the post and issued a retraction.

Plaza “was a friend,” the general said, and he was “saddened by her demise and condoles with her family and friends.”

“I myself demand justice for Yvonne,” he added.

Police Brig. Gen. Benjamin Silo, director of the Davao regional police, created the SITG Plaza — or Task Force Yvonne — to investigate the killing as speculation about the perpetrator ran wild on social media.

The task force said witnesses had identified Sialsa as the triggerman and Cachero as the driver of the motorcycle used as the getaway vehicle. Longakit was identified as the person who placed the victim under surveillance.

Japitan was described in the complaint as the “striker.”

The suspects now in custody, it said, had surrendered the Army-issued gun used in the killing.

The task force also established that Durante and Plaza had a “relationship,” based on their exchange of text messages, a point also noted by the NBI.

“Crime of passion,” said Archie Albao, the NBI regional director. “We got some witnesses to prove that there was really a relationship [between] respondent Durante and the victim.”

“Photos and videos” found stored in Plaza’s laptop can also attest to this, Albao added.

According to a diagram released by the police, Sialsa has executed an extrajudicial affidavit implicating Durante as the mastermind and Licyayo as the provider of logistics and information on the model’s location.

The diagram also said Plaza had tried to “blackmail” Durante. Task force officials did not elaborate.

Brawner described Durante as “a person of interest in the murder of Yvonnette Chua Plaza,” saying his removal as commander was intended “to give way to an impartial and thorough investigation.”

“The Army [assures] the public that this incident is not service-related,” he added.

A member of the Philippine Military Academy Class of 1992, Durante took over as commander of the 1001st IB, a unit based in Maco, Davao de Oro, in August 2021 after his stint with the PSG.

As chief of the presidential guard, Durante made headlines in December 2020 when then-Defense Secretary Delfin Lorenzana disclosed that members of the PSG were able to innoculate themselves with “smuggled’’ COVID-19 vaccines, at a time when the Food and Drug Administration had yet to authorize any brand.

P1-M reward up for arrest of killers of Davao model