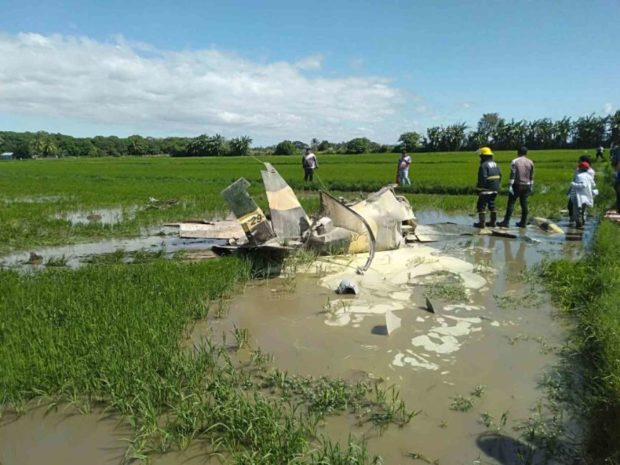 FINAL TRIP The Philippine Air Force says the last signal that it received from the pilots of a trainer aircraft, who left Sangley Point in Cavite City around 10 a.m. Wednesday, was at 10:34 a.m., several minutes before the plane crashed into a rice farm in Pilar, Bataan. —PHOTO COURTESY OF BATAAN POLICE

BALANGA CITY, Bataan, Philippines — Two pilots of the Philippine Air Force (PAF) were killed after their aircraft crashed during a training flight in Pilar, Bataan, on Wednesday morning, authorities said.

The local police identified the fatalities as Captains John Paulo Aviso and Ian Gerru Pasinos, who were on board the PAF aircraft Marchetti SF-260TP (turboprop engine) when it crashed in Barangay Del Rosario at 10:42 a.m.

Citing witnesses, Col. Romell Velasco, Bataan provincial police director, said the plane was seen “descending fast” before it crashed into a ricefield, which is located about a kilometer from the village’s main road.

In a separate statement, PAF spokesperson Col. Ma. Consuelo Castillo, said the military aircraft left its base at Sangley Point in Cavite City at 9:59 a.m., but they lost track of the plane after 30 minutes.

According to Castillo, the PAF’s SF-260TP fleet has been grounded while the investigation of the crash is ongoing.

The PAF has been using SF-260 Marchetti from Italy since the 1970s but the TP variant entered the service in 1994 as trainer aircraft for the PAF Flying School. It was converted into a light attack aircraft and transferred to the 15th Strike Wing based in Sangley in the 2000s.

The SF-260TP was used in different combat missions, including the battle with Islamic State-linked armed groups who laid siege to Marawi City in 2017.

In a separate incident in north Luzon, a six-seat Cessna plane carrying six people disappeared from radar an hour after it took off from the Cauayan City airport in Isabela province on Tuesday afternoon.

According to the airport personnel, the plane was supposed to arrive at the Maconacon airport around 3 p.m. The plane’s last contact with air traffic controllers was at 2:19 p.m., where it was located in Naguilian, Isabela.

Search and rescue operations were immediately launched on Tuesday afternoon to locate the aircraft and its passengers.

The operations, however, were stalled on Wednesday due to poor weather conditions, preventing a rescue team on board a helicopter from scouring the northern part of the Sierra Madre mountain ranges, said Constante Foronda, Isabela provincial disaster risk reduction and management officer.

Leon Rafael, regional director of the Office of Civil Defense, said they were verifying reports of possible sightings of the plane, including information that an explosion was heard near Sapinit village in Divilacan town, also in Isabela.

The Civil Aviation Authority of the Philippines (CAAP) on Wednesday placed the missing Cessna airplane in the “distress phase” following its disappearance.

Based on CAAP’s aviation regulations, a distress phase refers to a situation where “there is reasonable certainty that an aircraft and its occupants are threatened by grave and imminent danger or require immediate assistance.”