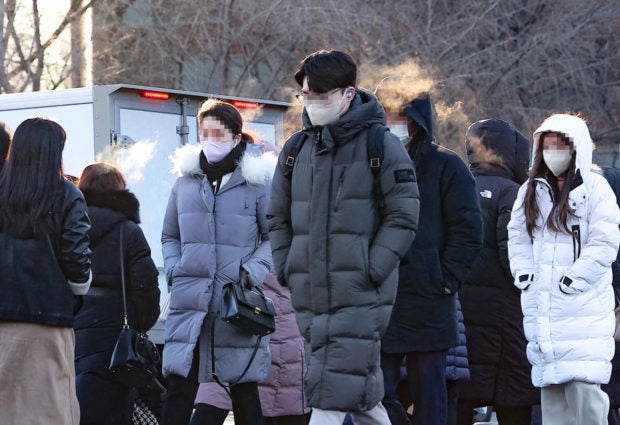 Pedestrians walk at Gwanghwamun Square in Seoul, Wednesday morning, as a cold wave warning was issued across the country. (Yonhap via The Korea Herald/Asia News Network)

SEOUL — With accidents and facility damage reports continuing nationwide Wednesday, the nation’s weather agency said the cold wave would ease from Thursday, but heavy snow is to follow.

As of 11 a.m. on Wednesday, 13 passenger ships on 10 routes were restricted due to strong wind and waves, and 84 trails at five national parks were closed.

Reports of frozen water meters continued throughout the night. As of 11 a.m. Wednesday, 140 cases of damaged water meters had been tallied nationwide, including 98 in Seoul and 21 in Gyeonggi Province.

In South Jeolla Province, where the cold wave and heavy snow were overlapping, a series of accidents involving vehicles and other facilities were reported. The South Jeolla Province Fire Department had received 55 reports by 7 a.m. on Wednesday, including 22 traffic accidents caused by slippery roads and several signs being blown by strong winds.

Some residents suffered from a blackout caused by an unknown reason amid the severe cold. A power outage occurred at around 5 p.m. on Tuesday in Millak-dong in Uijeongbu, Gyeonggi Province. Korea Electric Power Corp. carried out emergency restoration work, which was completed only at midnight on Wednesday, exposing residents to the cold for seven hours. Kepco is investigating the cause of the blackout, under the assumption that it was influenced by the continued cold snap.

The KMA predicted that the cold wave would peak Wednesday and ease from Thursday. However, just as soon as the cold wave abates, heavy snow is expected in most parts of the country.

Snow is expected to fall mainly around the Seoul metropolitan area from early Thursday. The KMA warned that snow combined with the low temperatures would likely freeze over roads, increasing danger at rush hour.

Temperatures will rise gradually, but are to stay below zero for the time being, as cold air enters periodically, said the KMA official in a briefing Wednesday.

Meanwhile, the Arctic cold wave that has brought unusually cold temperatures has not only stuck the Korean Peninsula, but also affected China and Japan.

In the small city of Mohe in China’s northernmost region, the temperature dropped to minus 53 C on Sunday, setting a record for lowest temperature there since 1969, when observation began. Nicknamed “China’s Arctic,” Mohe is a cold region with an average annual temperature of minus 3 C, but the recent cold wave is exceptional.

Japan was swept by heavy snow in several areas over two days from Tuesday to Wednesday. Nearly 1 meter of snow is to fall in the Hokuriku region until Thursday, according to the Japanese weather agency. The Japanese government urged caution, emphasizing that it is an unusual, once-in-a-decade cold wave.

The origin of the cold wave, which hit Korea, China and Japan, is cold air over Siberia. Cold air below minus 50 C over Siberia suddenly exploded, sweeping across China, the Korean Peninsula and Japan, one after another.