In Zambales, pilgrims back to honor ‘miraculous’ Marian image 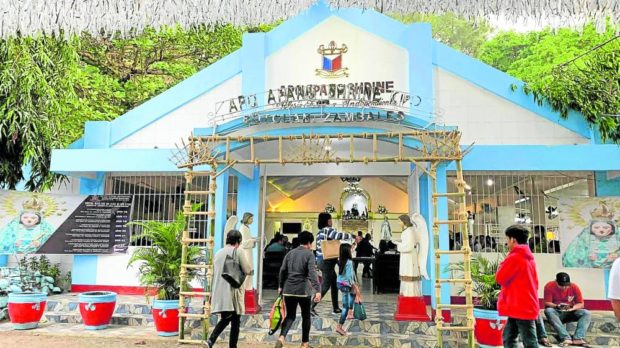 BOTOLAN, Zambales, Philippines — For four decades now, 78-year-old Nelly Alledo and her 44-year-old daughter Maya of Olongapo City have been devotees of the Blessed Virgin Mary, never missing the chance to join the feast day of Ina Poón Bato that is celebrated in this town every Jan. 24.

So, when COVID-19-related restrictions forced them to skip the annual pilgrimage in the past two years, they made sure to keep their devotion alive even at home.

“During those years when we’re not allowed to come to the shrine of Ina Poón Bato, we continued praying inside our house to thank her and seek guidance,” Nelly told the Inquirer in an interview on Jan. 22.

Nelly said her devotion to Apo Apang (the image’s local name, which means Little Queen) began in 1983 when Maya, who was 4 years old then, had trouble walking due to an unknown medical condition.

According to Nelly, she took Maya to the shrine of the patroness of Zambales, which pilgrims believed had “healing powers.” The shrine is being maintained by the Iglesia Filipina Independiente (IFI, or the Aglipayan church).

“I prayed to her, asking her to heal my daughter. After four years, Maya was able to walk properly,” Nelly recalled, attributing what she described as “miracle” to the wooden statue that is found in Loob Bunga resettlement area here.

Two days before the feast day of Ina Poón Bato this year, Nelly, Maya, and some of their relatives joined the more than 1,000 pilgrims coming from outside Botolan who were allowed to join the celebration.

In the last two years, nonresidents of Botolan and unvaccinated devotees were prohibited by the local government from joining the feast day as a preventive measure against the spread of COVID-19.

Aries Cariño, 62, a vendor of candles and oil outside the Aglipayan chapel, said that the queue of people wanting to touch the wooden image started as early as 3 a.m. on Jan. 21.

“The number of visitors had already doubled compared with that of last year since pilgrims from other areas were now allowed to visit the shrine,” Cariño said.

According to various accounts, the Aeta of Zambales had been venerating the wooden statue of Apo Apang set on a rock in the 17th century, when Spain began its colonization of the country, or before the first missionaries from the Augustinian Recollects arrived here in 1607.

In 1991, the entire community of Poon Bato suffered the devastation caused by the eruption of Mt. Pinatubo, but the Marian image was later recovered from underneath the chest-deep lahar, apparently surviving the catastrophe undamaged.