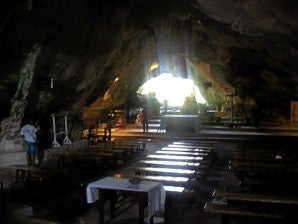 Monte Cueva Chapel The chapel inside the cave can sit about a hundred people. But on special occasions, Mass is held outside because of the thousands of devotees who flock to the shrine.

MAASIN CITY—Even before they got married in May, John and Era Estan of Hindang town in Leyte had long wanted to go to the Marian shrine on a mountaintop in Maasin City, which offers a panoramic view of the capital of Southern Leyte from the foot of the statue of the Our Lady of Assumption.

They were not disappointed.

“Yes, it’s true,” John says. He and his wife joined thousands of devotees who went to the Monte Cueva Asuncion dela Virgen Shrine, or simply Monte Cueva, on Aug. 31, the first of the nine-day novena Mass to celebrate the birthday of the Blessed Virgin Mary on Sept. 8.

“It’s one sight to behold which you don’t always find anywhere in the country. We are here to pray and, at the same time, visit one of Maasin’s tourist spots,” Era says.

Visitors also enjoy an unobstructed spectacle of the green scenery with the Camigu in Sea serving as backdrop, as well as houses and a smaller shrine on Jalleca Hills.

The shrine is called Monte Cueva (172 meters above sea level) because its chapel is inside the cave. It is located in the interior barangay of Rizal, 10 to 15 minutes by tricycle from the city center.

Canonically established by the bishop of Maasin, it is officially called the Shrine of the Most Precious Blood of Jesus and the Our Lady of the Assumption, the city’s patroness, according to Fr. Garnet John Dy Quirong, diocesan shrine director for five years.

A small signboard near a “sari-sari” (retail) store directs visitors to a small alley leading to the shrine. Pilgrims pass by houses and cross a short concrete bridge to arrive at the foot of the holy place.

There are two long stairways on both sides. The right one with about 550 steps is the upward entrance “path,” while the other, with over 300 steps, leads downward to the exit.

Quirong says Monte Cueva has become a popular destination for pilgrims for the past six years. 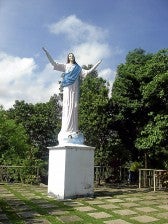 THE LADY of Assumption was put up in 1992 by the site’s previous land owner, lawyer Joaquin Chung Jr. on the mountain top in Barangay Rizal, Maasin City.

The first Mass in the area was held in 1999, but the big Marian statue was erected in 1992 by the former owner of the site, lawyer Joaquin Chung Jr., according to Tiro Cerdan, a staff member of the shrine.

“It was said that the previous owner had a dream about the Lady of Assumption, who asked him to build a shrine. True enough, he built it and subsequently donated the property to the diocese,” Cerdan says.

The statue faces Maasin’s coastal plain and has arms outstretched, indicating love and protection for the growing city.

Residents once referred to the place as “aghuban” (mountain cave). Others called it Sitio Tinibgan, meaning a carved rock shaped like a wooden basin on the lower portion of a brook.

The cave used to be a habitat for bats and birds. Stalactites embellished the ceiling, but there were later ripped off and sold as decorative items.

“People from all walks of life, shapes and sizes come here to pray and sacrifice,” Quirong says. “Coming here is not only a tradition. It has become the people’s commitment to their faith because they have seen the healing power of coming here by the grace of God and the intercession of Mama Mary.” 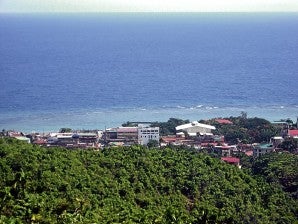 View from Monte Cueva: Devotees are awed by the panoramic view of Maasin City at the foot of the Statue of Our Lady of Assumption, patroness of Maasin City.PHOTOS BY CRIS EVERT LATO

Since the Our Lady of Assumption Shrine was built in 1994, residents say the city has not been hit by a typhoon until last Wednesday when public Storm Signal No. 2 was hoisted over Southern Leyte due to Tropical Storm “Ramon.”

Like Chung, Mila Gaviola dreamt in 1990 that the Blessed Virgin appeared and told her to build the shrine behind the provincial hospital overlooking the city. The place was called Jalleca Hill after its owners—the Jarabe, Llevares and Cadavos families.

Gaviola told the Catholic owners, about her dream and persuaded them to donate the land. They readily did.

The group which managed the shrine was organized in 1992 even before it was completed. It is composed of Marian devotees, some of whom belong to known families in Maasin.

The late Bishop Vicente Ataviado of Maasin gave his blessing when Gaviola informed her about the project. The shrine was completed four years later through the help and donations of devotees.

Unlike the Monte Cueva, the shrine on Jalleca Hills has not been recognized as the official Marian Shrine in Southern Leyte by the Palo Archdiocese.

Gaviola says the Church officials want her to turn over management of the shrine, but she refuses because it was built through the initiative of devotees like her.

Without the recognition, Masses are no longer held there, except on Sept. 8, the birthday of the Blessed Virgin, and in October, the Holy Rosary month.