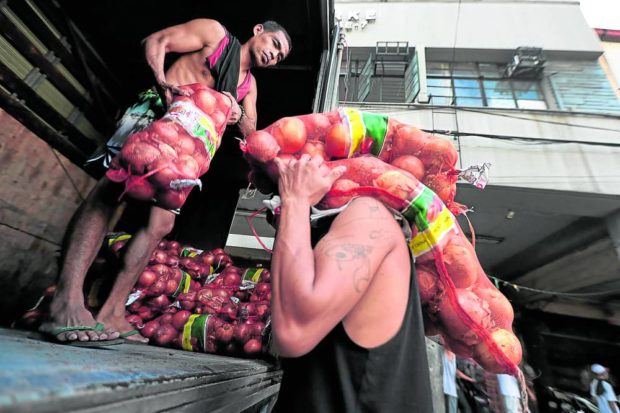 THEY’RE HERE | Truck helpers unload imported onions so these can be stored in a warehouse in Divisoria, Manila, on Monday, Jan. 23, 2023. It was not clear if this shipment, labeled as “Product of China,” is part of the government’s first batch of onion imports that arrived in the country. (Photo by GRIG C. MONTEGRANDE / Philippine Daily Inquirer)

MANILA, Philippines — The first batch of imported onions has finally arrived in the country as part of the government’s “temporary, short-term” solution to bring down the spiraling prices of the agricultural commodity.

Agriculture Assistant Secretary Rex Estoperez on Monday said that the 400 metric tons (MT) of yellow onions and 800 MT of red onions would need to be cleared first by the Bureau of Plant Industry (BPI) before being released into the local market. He did not say which country these came from.

The 1,200 MT of imported onions, however, comprise only 5.7 percent of the 21,060 MT allowed by the government to be sourced from other countries before the start of the local harvest season next month.

The batch also accounts for only about 24 percent of the import clearances issued by the Department of Agriculture (DA) covering 5,000 MT.

Estoperez said that the imported red onions would be distributed nationwide while the yellow variety would go to markets in Luzon only.

To determine their prices, the DA would go to onion-growing areas to get figures on the production costs of local farmers. “For the imported ones, their price should not go below the [local] cost of production or else, [our] farmers will end up losing money,” he said.

“That’s why we have to have a final figure then we go out to the market. We should have the final cost of production, then we can recommend the appropriate price cap at the retail level,” he added.

Estoperez, who is also the DA spokesperson, said that the volume of imported onions in the country was expected to bring down prices but not affect the livelihood of local farmers.

“It will not hurt the farmers because before we decided to import, we considered the volume and the timing of the arrival,” he said, adding that the DA also gave licensed importers only until Jan. 27 to complete their shipments to the country.

As of Monday, local red onions in Metro Manila were selling for P200 to P350 per kilogram from only P180 per kilo a year ago, based on the DA’s price monitoring. For locally grown white onions, the retail price was between P200 and P350 per kilo.

The prevailing retail prices of local onions, however, were significantly lower compared to the all-time high of P700 per kilo recorded during the holiday season.

DA urged to wait for harvest before importing onions