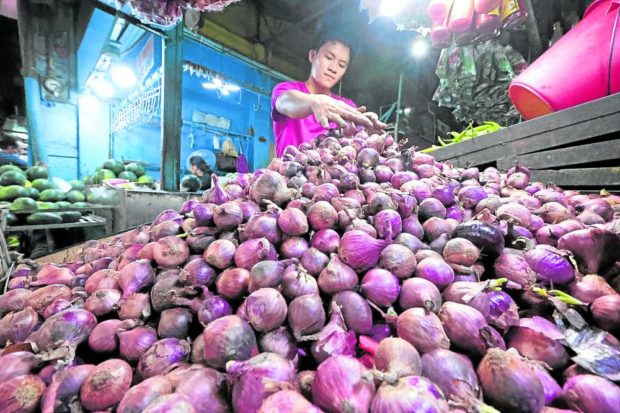 A market vendor sells red onions for P600 per kilo at Marikina Public Market on Dec. 27, 2022. Prices of local red onions in Metro Manila have reached as much as P700 per kilo. Some Filipino travelers from abroad have taken to bringing in onions and other vegetables as pasalubong because they are cheaper abroad. (File photo by GRIG C. MONTEGRANDE / Philippine Daily Inquirer)

MANILA, Philippines — Filipino travelers who are bringing in cheaper vegetables from abroad need to get clearances first even whether for personal or commercial use, the Bureau of Customs (BOC) at the Ninoy Aquino International Airpot (NAIA) warned in a Facebook post on Monday.

The clearances must be obtained from the Bureau of Plant Industry (BPI), the BOC said.

“This is to safeguard and prevent the spread of plant pests in the Philippines,” the statement said.

The BOC-Naia posted the warning after several social media posts and news reports showed Filipino travelers and migrant workers now packing pricey vegetables, like onions, as pasalubong (small gifts given to relatives and friends after traveling) instead of the usual chocolates and delicacies.

Another Facebook post on Monday also showed that BOC-Naia was able to seize onions and assorted fruits from 10 flight attendants coming in from Dubai and Riyadh.

Inspectors found the agricultural products through physical and x-ray examinations of the flight attendants’ baggage.

The flight attendants had no clearances for the items, which are considered “regulated importations” under the Customs Modernization and Tariff Act, according to the Facebook post.

The flight attendants, who may be charged with smuggling, were still under investigation for other violations.

“The flight attendants also exhibited unruly behaviors by stomping/stepping and destroying/crushing the said products without permits in public view upon being informed of their violations,” the statement added.

Prices of onions and other food items have skyrocketed as the country weathered through an 8.1% headline inflation rate in December 2022 — which brought the full-year average to 5.8%.

This is the highest inflation rate since November 2008.

In several markets and grocery stores, onions are being sold for as much as P500 per kilogram. Egg prices are also starting to increase.

—WITH A REPORT FROM NIÑA CUASAY (TRAINEE)