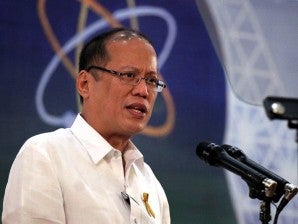 Sharp increases in fuel prices that inevitably push up the cost of living may have pulled down public satisfaction with the performance of President Benigno Aquino III from “very good” to “good,” a lawmaker and a labor leader said Monday.

Eastern Samar Representative Ben Evardone said the past quarter saw a series of fuel price increases that was beyond the control of the President, but the lawmaker added the people did not want to accept any explanation justifying the spike.

“Of course, people won’t accept the fact that prices of oil are being dictated by international market forces. So this can be the main reason for the drop,” Evardone said.

Except among the upper and middle classes, public satisfaction with Mr. Aquino’s performance dipped in the D and E socioeconomic groups and across geographic areas in the first quarter, according to results of a nationwide survey by Social Weather Stations (SWS).

“Governance should not be survey-driven,” Mr. Aquino told reporters after he inspected Holy Week preparations at the Araneta Center bus terminal in Quezon City.

He said his current ratings may have been affected by the moves taken by some groups to make a big issue out of the recent oil price increases.

But the President noted that prices of basic goods and commodities did not jump when there were sharp increases in the global price of oil.

Kilusang Mayo Uno (KMU), a militant labor group, said the dip in Mr. Aquino’s net satisfaction ratings was due to his inaction over the people’s problems, such as the constant fuel price increases and the continued rise in the prices of basic commodities.

A youth group has dubbed this inaction “Noynoying,” a play on the President’s nickname.

“Despite the spectacle of the impeachment trial (of Chief Justice Renato Corona), it became clearer to the public that the President is not doing anything to provide people with relief from the high prices of oil and basic goods and services, low wages, joblessness and the demolition of poor communities,” KMU chairman Elmer Labog said in a statement.

He said the administration’s upbeat pronouncements over record highs in the stock market, improved investor confidence and credit rating upgrades, would be for naught unless it addressed hunger and poverty.

A public that grows poorer and more hungry by the day would be unable to stomach such claims, Labog added.

“In the end, people will believe what they feel in their guts, in their stomachs, more than what they are being told by the government,” he said.

Mr. Aquino said people were seeing how the government was working for their benefit, “but we also cannot avoid that sometimes those being interviewed in surveys were people that we have not taken care of properly.”

He said governance should not come from surveys but from what was right against what was wrong. “We will push for what is right,” the President said.

The survey only covered public satisfaction and dissatisfaction and could not explain specific reasons behind the responses given by respondents, Leo Laroza, survey research and communication specialist at SWS, told the Philippine Daily Inquirer in a phone interview.

Laroza noted, however, that “Mr. Aquino’s net rating was pulled down largely by his net rating in Luzon outside Manila, where he posted a 15-point drop.”

Since he assumed office, the President had posted mostly “very good” net ratings, getting his record high of 64 in November 2010.

The respondents were also asked whether they thought the President was “serving the interests of the rich, middle class or the poor.” They were allowed to give multiple responses.

Among those who were dissatisfied with the President’s performance, 28 percent said they viewed the President to be serving the rich, followed by those who thought he was serving the middle class (17 percent) and the poor (14 percent).

Mr. Aquino’s net satisfaction rating statistically remained unchanged among Class ABC, where it was up by one point from a “very good” 61 points last December to 62 points in March.

Those who said the President served the poor sharply declined by 13 points to 35 percent in March.

Those who said he was serving the rich increased by 4 points to 27 percent.

Evardone said the drop in the President’s satisfaction rating was expected as most leaders had suffered the same fate as they approached the second half of their terms.

Still, the lawmaker said the President’s 49-point rating was still very high compared with the ratings of his predecessors.

He said Mr. Aquino should continue to capitalize on this to introduce unpopular but necessary structural reforms. With reports from Cynthia D. Balana and Leila B. Salaverria