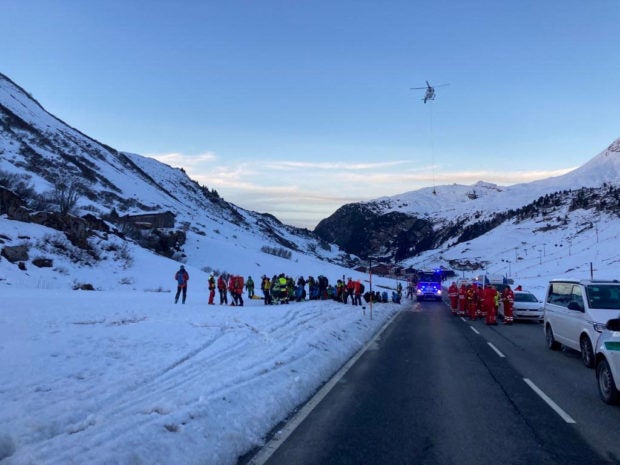 Rescue workers stand near the site where an avalanche buried 10 skiers in the Lech/Zuers free skiing area on Arlberg, Austria, December 25, 2022. Police Vorarlberg/Handout via REUTERS

Two people remained unaccounted for after an avalanche in the Lech/Zuers free skiing area in western Austria on Sunday, December 25, that initially prompted a search for 10 people feared buried, the Austrian Press Agency (APA) reported.

The suspicion that 10 people were buried by the avalanche was based on a skier’s video that showed “how the skiers come into contact with the avalanche,” APA quoted Hermann Fercher of the Lech/Zuers tourist office as saying.

One of those rescued was injured and flown to a hospital in Innsbruck. Another was hurt but was able to free himself and go to another hospital, regional security councilor Christian Gantner told APA.

Six other people spotted in the video were uninjured.

The fate of the final two was unknown, APA reported.

Lech/Zuers markets itself as “one of the best ski areas in the world” and part of the cradle of Alpine skiing. The last entry on ski conditions on the resort’s website warns of “considerable avalanche danger.”

The resort’s website said that the ski area was closed as of 5 p.m. (1600 GMT) on Sunday and that there would be an update on skiing at 8 a.m. (0700 GMT) on Monday. A spokesperson for the resort could not immediately be reached for comment.