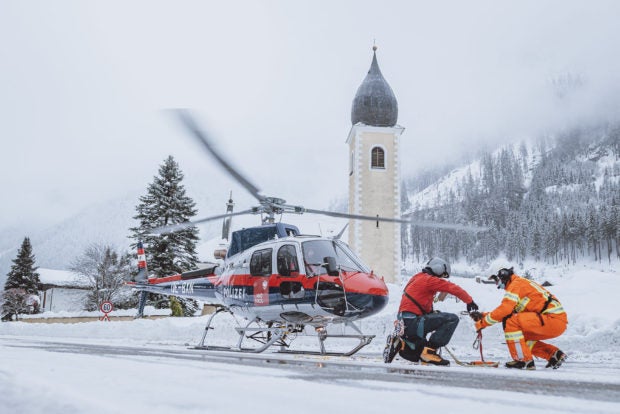 A police helicopter is made ready for a supply flight on December 8, 2020 in Huben in the municipality of Matrei, eastern Tyrol, after heavy snowfall caused danger of avalanches and traffic obstruction. AFP FILE PHOTO

Police said that one incident had claimed the lives of a group of Swedish skiers going off-piste with a mountain guide in the zone around Ischgl, near the Swiss border.

The guide and four of the group were swept away with just one member surviving. He managed to call for help and was airlifted out by helicopter.

Also Friday, a man aged 60 and his 61-year-old wife were engulfed while cross-country skiing near the village of Auffach, Tyrol police said.

Saturday then saw an Austrian aged 58 killed at Schirmn near Innsbruck in an avalanche which injured four others.

Further west, an experienced skier of 43 was killed in the popular Vorarlberg region as Austria saw exceptional quantities of snow fall going into and across the weekend.

Five winter sports enthusiasts were buried by snowfall in the major resort of Soelden but were all rescued.

“The past three days have seen some 100 avalanche-type incidents requiring 70 interventions,” Tyrol regional authorities said Sunday, dubbing the situation “unprecedented” and warning of more to come.

Recent years have seen avalanches claim around 20 lives a year in Austria, fewer over the past two years after the pandemic vastly reduced the numbers of skiers.

In neighboring Switzerland, an avalanche in Reckingen in the southeastern Wallis region killed a 68-year-old on Saturday, while a second person was injured, police said.

The two were part of a group of four Italian hikers and were quickly found and freed from the snow by the other two. One died at the scene and the other was airlifted to hospital.

According to a provisional report by the MeteoSwiss weather service on Friday, people have been caught up in 45 avalanches so far this winter.

On Thursday, one person died and several others were injured in avalanches in Switzerland’s Graubunden region, which borders Austria’s Tyrol.