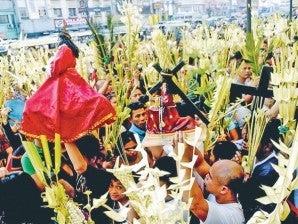 The blessed palm fronds, or palaspas, are not meant to be used as anting-anting (amulet). Nor are they to be used as feeds for fighting cocks, or to cast a spell on the objects of your love.

Manila Archbishop Luis Antonio Tagle gave this admonition to the Catholic faithful on Palm Sunday, which marked the start of the Holy Week.

“Let the palm fronds be a reminder that Jesus Christ is coming and we must accept Him in our hearts, our homes and in our country,” Tagle said before the start of the 7 a.m. Mass at San Fernando de Dilao Parish Church in Paco, Manila.

In more earthly terms, Palm Sunday augured  for good weather around much of the country, with the weather bureau predicting blue skies, especially over  Metro Manila and southern Luzon.

In his brief remarks before the start of the service, Tagle said he was aware that some people had become superstitious about the palm leaves that were being blessed at the end of Palm Sunday Masses.

The Holy Week commemorates the suffering of Jesus at the hands of the Jews, His crucifixion and His eventual resurrection on the third day, celebrated on Easter Sunday. Palm Sunday, on the other hand, marks Jesus’ triumphant entry to Jerusalem while riding on a donkey, with people waving tree branches as He made His way into the city.

“The palm fronds are not for use as anting-anting. Also don’t use them as feeds for roosters before the start of cockfights … I know some people do that,” Tagle said, speaking in Filipino.

“Don’t also use them for kulam (voodoo) and as charms to entice the objects of affection … That’s not the way to use the palm fronds,” he said.

He hoped that as Catholics waved their palm leaves and had them blessed, they would realize the greater meaning of what they were doing, which was to accept wholeheartedly the Man that God had sent to save the world from sins.

“I hope when we get to our homes, these palm leaves would remind us that we welcome Christ in our hearts, in our homes and in our country,” he said.

In another Mass recently, Tagle had encouraged the faithful to “master the disciplines of dying” during the season of Lent so that they could be reconciled with God and that their relationships with other people be mended.

He said the three ways of “dying” and being reconciled with God could be done through alms-giving, fasting and prayer.

“Let us perfect the art of dying—dying to self—so that new life will come to us. If you do not want and you refuse to die to self, you will never ever experience new life in Christ,” he said.

In Quezon City, the Philippine Atmospheric, Geophysical and Astronomical Services Administration (Pagasa)  predicted most of the  country would have a fairly good weather in the next five days, no low pressure area being seen to mar the Holy Week observance.

For the past week, moderate to heavy rains caused by the tail end of the cold front had plagued the capital and surrounding provinces.

In its weather advisory, Pagasa said no low pressure area had been sighted in Philippine waters.

However, the eastern seaboard might see downpours in the afternoons and early evenings, owing to the cold front, which generates masses of clouds and strong wind.

The effects of that weather system could be felt in Luzon, where chances of rains and gale are high, Pagasa said.

“Fishing boats and other small seacraft are advised not to venture out into the sea while larger sea vessels are alerted against big waves,” Pagasa said.

Visayas and Mindanao could also see isolated rain showers in the afternoons or evenings due to the easterlies, it said.

Elsewhere in the country, the Lenten message from the Church sounded more down to earth.

Bishops and priests in the Visayas called on President Benigno Aquino III to heed the call of poor Filipinos for him to regulate the price of oil products and basic commodities.

In a Lenten statement, the Visayas Clergy Discernment Group (VCDG) echoed the appeal of Pope Benedict XVI for governments to “safeguard and value the human person, who is the source, the focus and the aim of all economic and social life.”

The VCDG said independent research institutions had reported that oil companies had “overpriced” oil products by as much as 43 percent.

It said the government had also earned P48 billion in revenues annually, or P239.6 billion in the last five years, from the 12-percent value-added tax (VAT) imposed on oil products.

“We thus call on the Aquino administration to manifest that it is indeed concerned with the well-being of the Filipino people by taking steps to alleviate their sufferings, such as by regulating the oil industry, so that oil companies will be stopped from overpricing the price of oil; by removing the VAT on oil; and by instituting price control over basic commodities,” Jaro Auxiliary Bishop Gerardo Alminaza, VCDG head convenor, said in a statement.

The removal or suspension of VAT on oil products is among the measures being pushed by various legislators, transport industry leaders and business groups to alleviate the impact on the people of the continued increase in oil prices. With a report from Nestor P. Burgos Jr., Inquirer Visayas