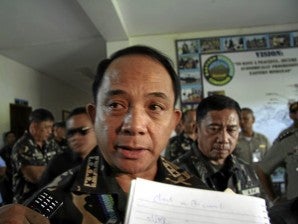 The highest military official to recently leave the service supposedly without a pabaon (send-off gift) has been rewarded.

“The President has signed the papers of Oban,” Valte said in her weekly media forum aired over government-run dzRB Radyo ng Bayan.

Oban stepped down on December 13 after leading the AFP for only nine months. He was named to the top military post after revelations of past chiefs of staff allegedly receiving pabaon came out in a Senate inquiry.

Retired Lieutenant Colonel George Rabusa, a confessed participant in the corruption within the military, testified in a Senate blue ribbon committee hearing last year that past AFP chiefs of staff pocketed millions of pesos on assuming and then leaving the top military post. Christian V. Esguerra