Signal No. 1 in 3 parts of Bicol due to Tropical Depression Rosal | Inquirer News

Signal No. 1 in 3 parts of Bicol due to Tropical Depression Rosal 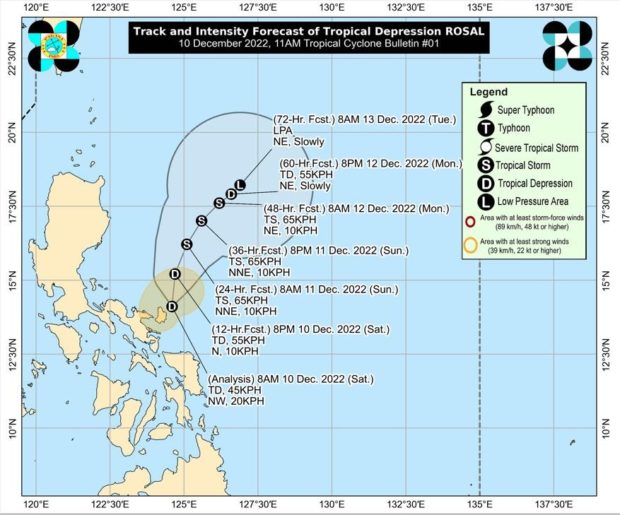 MANILA, Philippines — Tropical Cyclone Wind Signal (TCWS) Number 1 has been raised over parts of Luzon Saturday morning after the low-pressure area east of the country intensified into a tropical depression, according to the Philippine Atmospheric, Geophysical and Astronomical Services Administration (Pagasa).

In its  11 a.m. advisory, Pagasa reported that  Tropical Depression Rosal  was spotted some 110 kilometers north-northeast of Virac, Catanduanes or 315 kilometers east of Infanta, Quezon.

Signal no. 1 is up in the following areas:

The aforementioned areas may experience strong to near gale strength winds due to Rosal, said Pagasa.

“Moderate to heavy with at times intense rains possible over Bicol Region and Quezon,” said Pagasa.

Meanwhile, moderate to heavy rains are also possible in the Mimaropa (Mindoro, Marinduque, Romblon, Palawan) and Western Visayas regions, while there may be light to moderate with at times heavy rains in Aurora and the rest of the Calabarzon (Cavite, Laguna, Batangas, Rizal, Quezon)  and Visayas regions.

“Tropical Depression Rosal is forecast to decelerate while moving generally northward in the next 12 hours before turning north northeastward or northeastward for the remainder of the forecast period,” said Pagasa.

The northeast monsoon also prompted Pagasa to raise a gale warning over the seaboards of Northern Luzon.