Use of floating bridge between Quezon, Batangas suspended due to LPA | Inquirer News

Use of floating bridge between Quezon, Batangas suspended due to LPA 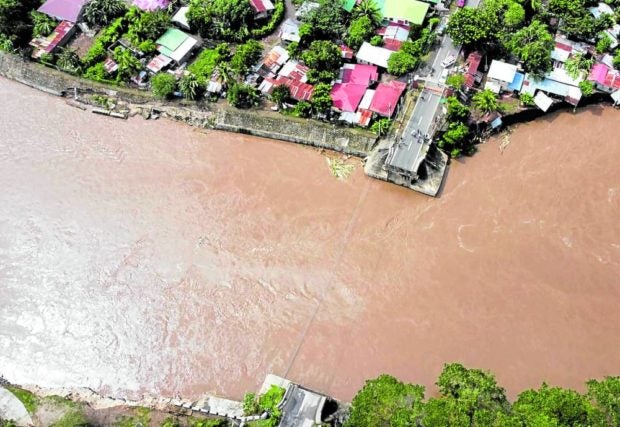 LUCENA CITY – The Philippine Coast Guard (PCG) on Friday, December 9, temporarily stopped the use of a floating bridge between Batangas and Quezon province in anticipation of a low-pressure area (LPA) that is expected to bring rains to several regions across the country.

Leoncio Umali, village chieftain in Barangay (village) Manggalang Bantilan in Sariaya, Quezon, said PCG personnel on Friday placed the 100-meter-long and 4-meter-wide pontoon bridcge made from fiberglass on one side of the Bantilan River.

Umali said the move was a precautionary measure against possible flash floods because of bad weather.

“In the meantime, we’re back to riding boats again in crossing the river. Just [to] be safe,” Umali said on his Facebook page.

On Dec. 1, the PCG installed a floating bridge as a temporary replacement for the collapsed concrete bridge.

According to the PCG, its personnel would continuously assist the residents in crossing the river to ensure their safety. But in case of inclement weather, the residents would be prohibited from using the temporary bridge, it noted.

The floating bridge helps residents, particularly high school students from Manggalang-Bantilan, who were forced to ride small boats to reach their school in Tipas after Paeng.

The Philippine Atmospheric, Geophysical and Astronomical Services Administration (Pagasa) forecasted that Metro Manila and several other regions across the country including the Calabarzon (Cavite, Laguna, Batangas, Rizal, Quezon) would experience rain this weekend due to an LPA east of Mindanao, which may develop into a storm within 24 to 48 hours.

It then advised residents of areas where rain is seen to take place this Saturday to be cautious, as landslides and flash floods are possible.