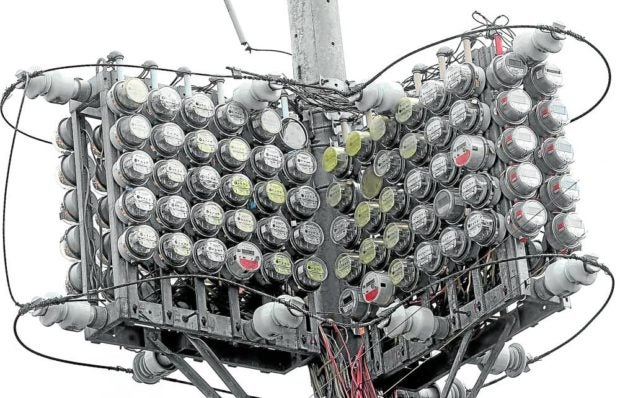 ANOTHER HIKE Typical households will be paying P10.28 per kilowatt hour. —INQUIRER PHOTO

Customers of Manila Electric Co. (Meralco) may need to scale back their expenses after the country’s largest power distributor announced an increase of P0.3297 per kilowatt-hour (kWh) in electricity rates.

This brings the cost of electricity for a typical household to P10.2769 per kWh this December from last month’s P9.9472 per kWh.

For residential customers with a consumption of 200 kWh, this is equivalent to an increase of about P66 in their December electricity bill.

Although this month’s generation charge declined, the completion of a refund, which the Energy Regulatory Commission (ERC) mandated previously jacked up power rates.

“This month’s overall rate increase was mainly due to the completion of a distribution-related refund equivalent to P0.4669 per kWh for residential customers,” Meralco said in a statement.

Meralco is still implementing three refunds totaling P1.3340 per kWh for residential customers, which it said continues to temper its customers’ monthly bills.

Rates coming from Meralco’s power supply agreements fell by P0.2079 per kWh as the First Natgas-San Gabriel plant went back online on Oct. 15, following its scheduled maintenance outage from Oct. 1 to Oct. 14.

The appreciation of the Philippine peso likewise contributed to the decline in the overall rates.

The decrease of P1.3985 per kWh in Wholesale Electricity Spot Market prices further pulled down the December generation charge, owing to the improved supply situation in the Luzon grid.

“While average daily capacity on outage remained at the 3,900-MW (megawatt) level, the reduction in both peak and average demand in the November supply month resulted in fewer impositions of the secondary price cap, which triggered only 21 percent of the time in November versus October’s 52 percent,” Meralco said.