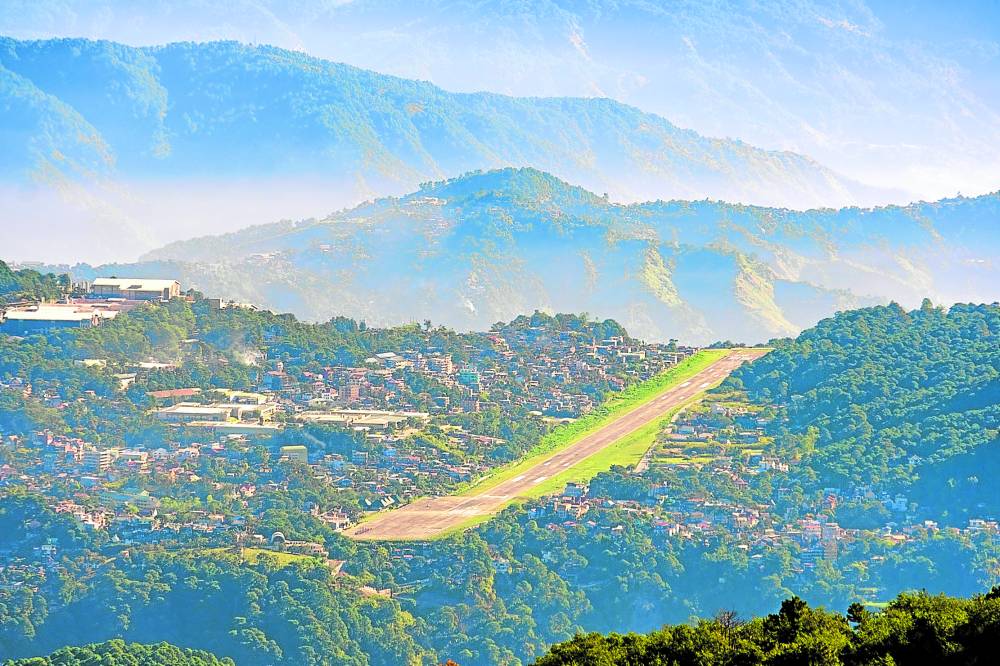 READY TO OPERATE Loakan Airport in Baguio City will start commercial flights to Cebu on Dec. 16 after sitting idle for years. For old Ibaloy residents, the resumption of air traffic to the summer capital brings back memories of how the airport was built within settlements of indigenous peoples in Barangay Loakan. —NEIL CLARK ONGCHANGCO

BAGUIO CITY—More than a week before commercial flights resume at the city’s only airport on Dec. 16, Ibaloys gathered at their avong (communal house) in Burnham Park on Tuesday as they prepared for the possible changes to their routines.

Ibaloy families living around the city’s only runway in Barangay Loakan have asked the local government to give them continuous access to their properties through Loakan Airport once Philippine Airlines planes complete their trips for the day.

The city government has opened an alternative road for people living outside the runway perimeter to keep them safe from aircraft landings.

Loakan barangay chief Edouard Cayetano said he also asked a local transport group to provide free shuttle service for residents because the runaway is still their closest route to schools, their workplaces and downtown Baguio.

“They would have to drive or walk another 4.5 kilometers around the airport to reach their destination or get home,” he said.

Ibaloy families are not opposed to the return of commercial airlines “because that would revive the city’s economy, but we also do not want to be taken for granted,” said Beauregard Carantes, one of the elders in the area.

“We want the status quo because many generations have learned to live with airplanes for almost a century since the airport took over our grandparents’ rice fields before World War II,” Carantes said.

Their sentiments are expressions of what Ibaloys call ma-kes (extreme emotional disturbance or grief) that lingers after their lands were expropriated by the American colonial government to build the airport in 1931, said Ibaloy researcher Rosella Camte-Bahni, who is conducting the Baguio government’s cultural mapping project.

Bahni said Ibaloy families went to court in order to keep the rice fields at that time, but they lost the legal battle, which was a setback 22 years after the landmark 1909 United States Supreme Court decision that recognized the “native title” of Ibaloy herder Mateo Cariño over grazing lands in waht is now Camp John Hay.

“The idea of building an airport for the city emerged after the first successful landing of a plane on Burnham Park in 1919,” she said, citing the cultural mapping report of Loakan.

On July 4, 1931, Loakan Ibaloys petitioned the city’s last American mayor, Eusebius Halsema, to drop the airport plan “when the people learned that their rice fields would be taken,” she said.

In that paper, Dr. Jose Cariño, who defended the Ibaloy position in court, was quoted as saying, “The rarity of level lands in Benguet, suited for planting rice, forces Benguet Igorots, at great expense and labor, to convert mountainsides and riverbeds into rice fields.”

“This very fact makes the Loakan rice fields very valuable to their owners [and is] one of the reasons why the owners of Loakan are unwilling to sell their rice fields,” said Cariño, who became Baguio mayor from 1946 to 1949, and was a son of Mateo Cariño.First landing

According to Bahni, when the government filed expropriation proceedings, “the Ibaloys questioned the amount recommended,” and the families waited another six years until the Court of Appeals ruled on March 31, 1938, that they were entitled to eight centavos for every square meter of expropriated land as well as for crop damage.

On March 11, 1932, Capt. Theodore Cammaan, a Luftwaffe ace during World War I, landed a Klemm trainer monoplane for the first time on the Baguio runway, Bahni said.

The Philippine Air Taxi Co. began its commercial service on March 31 of the same year.Through the years, the Loakan runway has served flights from Asian Spirit, Cebu Pacific and Sky Pasada, which was the last airline to use the Baguio airport in 2011.

Bahni said PAL is still the longest commercial air service to use Loakan. It stopped the Baguio routes in 1998.

During a press briefing on Dec. 2, PAL Express officer in charge Rabbi Vincent Ng said the opening of a Baguio-Cebu route marked the airline’s historic return to Loakan.