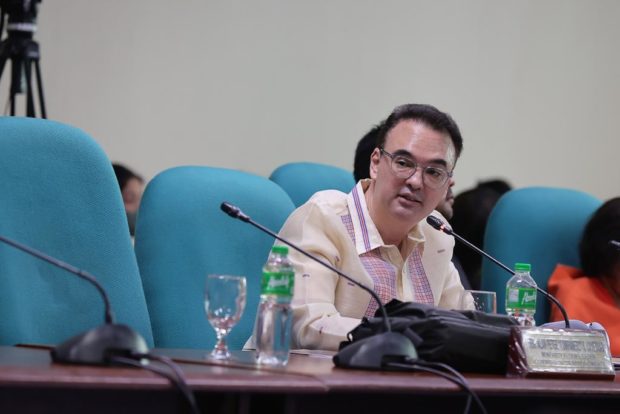 MANILA, Philippines — Senator Alan Peter Cayetano on Wednesday shot pointed questions at ad interim Transport Secretary Jaime Bautista regarding the Department of Transportation’s (DOTr) handling of delays in the implementation of big-ticket rail projects throughout the country, saying the secretary needs to “check his facts” regarding the status of these multi-billion peso projects.

During a tense exchange at the Commission on Appointments (CA) hearing on December 7, 2022, Cayetano asked Bautista if he knew when the Metro Manila Subway Project, the country’s first underground railway project, broke ground during the Duterte administration, would be completed.

When Bautista responded that he was told the project would be fully operational by 2028 or 2029, Cayetano asked whether the DOTr really intended to push back the completion of the project by at least a year.

The transport secretary explained that the estimated timeline for the completion of the Metro Manila Subway – which is projected to cost a total of P488.47 billion once completed – was pushed back because of the delay in assembling and operating the tunnel boring machines being used for the project, as well as logistical difficulties due to the pandemic.

Shooting back, Cayetano said: “Please check your facts, dahil tinanong ko si (former) Transport Secretary [Arthur] Tugade before he left office and he said they were right on schedule.”

“Again, check your facts. Because it was right before June 30 na sabi by 2027 complete na ang subway,” he added, referring to the last day of the Duterte administration and the start of the current one.

Bautista said another major reason for delays in implementing the Metro Manila Subway and other major railway projects in the country is that China had backed out of its funding commitments for these.

According to the secretary, one such project is the Philippine National Railways South Long-haul Rail Project, which would restore the famed Bicol Express train service between Metro Manila and the Bicol Region.

He added that the Subic-Clark Railway project was similarly “in the pipeline” because of funding concerns.

Cayetano also voiced his dismay at Bautista’s inability to supply an “apples-to-apples” comparison of rail construction costs for projects assisted by Japan versus those funded by China.

The different kinds of tracks Bautista cited prompted Cayetano to say he “cannot see why you cannot tell us now the apples-to-apples comparison for this.”

“Everybody has their own interests. How do we get better if wala tayong independent assessment? Kasi there’s all types of trains and different qualities. It’s important na may sarili tayong assessment, kaya ‘di ko lang ma-accept today na wala tayong apples-to-apples,” he added.

Based on his discussions with Chinese diplomats, Bautista explained that Chinese rail construction costs could be 20 to 30 percent cheaper than those offered by Japan.

Due to lack of time, the Commission on Appointments deferred its decision to confirm Bautista as transport secretary.