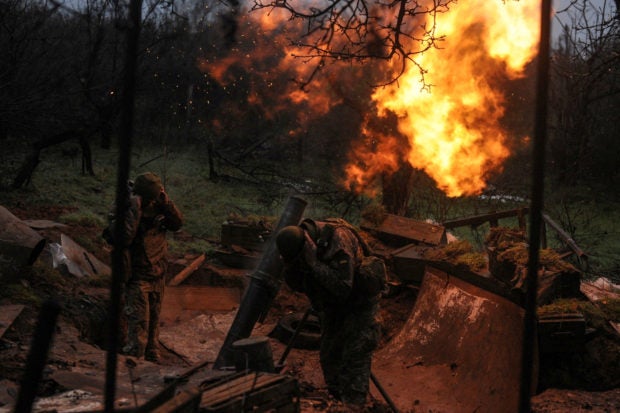 Ukrainian servicemen fire a mortar on a front line, as Russia’s attack on Ukraine continues, in Donetsk region, Ukraine, in this handout image released November 20, 2022. Iryna Rybakova/Press Service of the 93rd Independent Kholodnyi Yar Mechanized Brigade of the Ukrainian Armed Forces/Handout via REUTERS

A third Russian airfield was set ablaze by a drone strike, a day after Ukraine demonstrated an apparent new ability to penetrate hundreds of kilometers into Russia with attacks on two air bases.

* Russia and Ukraine said they exchanged 60 prisoners of war on each side in the latest such swap.

* Twin strikes on air bases deep inside Russian territory have dealt Moscow a major reputational blow and raised questions about why its defenses failed, analysts said, as attention turned to the use of drones in the war between neighbors.

* Ukrainians astonished the world – and themselves – in 2022, withstanding an all-out military assault by a superpower meant to crush them within days. Now, with the war’s first winter setting in, it is Russia that is on the defensive, drafting in hundreds of thousands of reservists to protect remaining occupied territory – about a fifth of Ukraine.

* About half the region surrounding the Ukrainian capital will remain without electricity for the coming days after the latest Russian missile strikes on power facilities, the Kyiv regional governor said. * Western powers’ leverage over Russia has increased with their $60-a-barrel price cap on Russian crude oil, a U.S. Treasury official told Reuters.

* Hungary vetoed an 18-billion-euro ($19 billion) loan to Ukraine from the European Union as its row with the bloc over democratic backsliding rumbled on and the other 26 member states delayed a decision on releasing billions of aid to Budapest.

* The United States and Russia accused each other of not being interested in Ukraine peace talks as calls grow at the United Nations for a ceasefire and diplomacy to end the war started by Moscow’s invasion nine months ago.