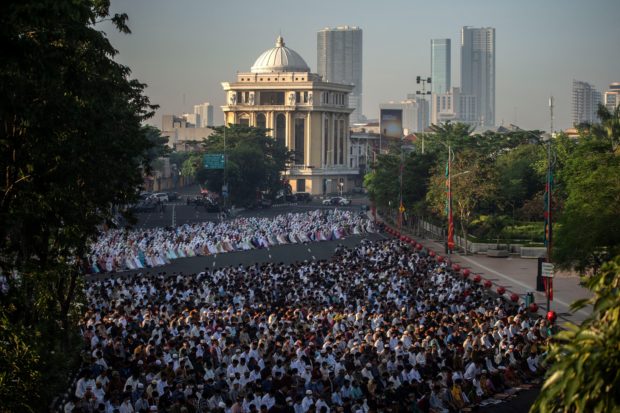 Muslims pray during Eid al-Fitr which marks the end of the holy month of Ramadan in Surabaya on May 2, 2022. AFP FILE PHOTO

JAKARTA — Indonesia is expected to ratify sweeping changes to its criminal code on Tuesday, senior officials confirmed, in a legal overhaul that critics say could wind back hard-won democratic freedoms and police morality in the Southeast Asian nation.

Among the most controversial revisions to the code are articles that would penalize sex outside of marriage with up to one year in jail, outlaw cohabitation between unmarried couples, insulting the president, and expressing views counter to the national ideology, known as the Pancasila.

Deputy speaker of the House of Representatives, Sufmi Dasco Ahmad, and Bambang Wuryanto, head of the parliamentary commission overseeing the revision, told Reuters on Monday that parliament would hold a plenary session on Tuesday to ratify the new code.

The government and House of Representatives have agreed on the draft code, clearing a hurdle to its passage.

Decades in the making, the revision of the country’s colonial-era penal code has sparked mass protests in recent years, although the response has been considerably more muted this year.

Parliament had planned to ratify a draft new code in September 2019, but nationwide demonstrations over perceived threats to civil liberties halted its passage.

Legislators in the world’s third-largest democracy have since watered down some of the articles deemed most contentious.

“This criminal code is a huge setback for Indonesia,” said Bivitri Susanti, a law expert from the University of Indonesia.

“The state cannot manage morality,” she said. “The government’s duty is not as an umpire between conservative and liberal Indonesia.”

Articles on customary law, blasphemy, protesting without notification and expressing views divergent from the Pancasila were all legally problematic because they could be widely interpreted, she said.

Once ratified, the new code will come into effect after three years as the government and related institutions draft related implementing regulations.