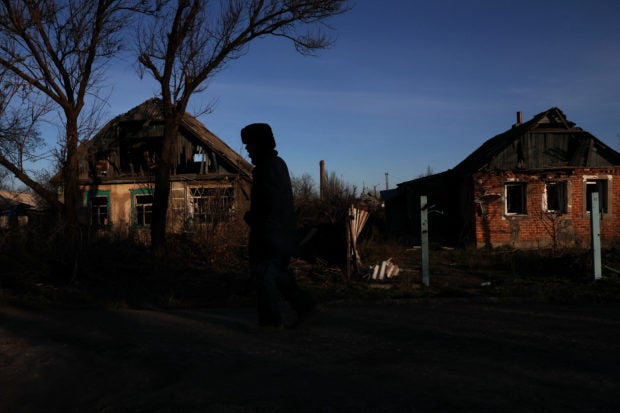 A man walks down a street of destroyed homes as Russia’s invasion on Ukraine continues in Siversk, Ukraine, December 4, 2022. REUTERS

KYIV — President Volodymyr Zelensky urged Ukrainians to be patient and strong in resisting the rigors of winter, as officials pressed ahead with efforts to restore power and other services knocked out by Russian air strikes.

Russia has been pounding Ukraine’s power infrastructure since early October, causing blackouts and leaving millions without heating as temperatures plummet.

“To get through this winter, we must be even more resilient and even more united than ever,” Zelensky said in his nightly address on Sunday.

“We cannot allow any kind of internal conflicts and strike that can weaken us all, even if someone out there thinks that it will somehow strengthen him personally.”

U.S. Under Secretary for Political Affairs Victoria Nuland said on Saturday that Russian President Vladimir Putin was taking the war to a new level of “barbarism” by trying to turn off the lights of civilians.

Russia says the assaults do not target civilians and are meant to reduce Ukraine’s ability to fight and push it to negotiate – though Kyiv says such attacks are a war crime.

Western pressure on Moscow for its actions in Ukraine culminated in the imposition of a $60 per barrel price cap on Russian seaborne crude oil that came into force on Monday.

Russia’s deputy prime minister said Moscow was working on ways to prohibit the use of a price cap.

“We will sell oil and petroleum products only to those countries that will work with us under market conditions, even if we have to reduce production a little,” Alexander Novak said.

Zelensky said on Saturday that the world had shown weakness by setting the cap at $60.

In Ukraine, officials have been resorting to scheduled blackouts as they race to restore power.

Kyiv Mayor Vitaliy Klitschko said on Telegram that blackouts would be confined from Monday to planned “stabilization” power cutoffs to get the grid working again, but added the situation remained “difficult”.

The country’s largest power supplier, DTEK, said blackouts were planned for three other regions – Odesa, Donetsk and Dnipropetrovsk in Ukraine’s south and east.

But the offer by local authorities in Kherson to allow residents to cross the Dnipro to join relatives had little effect. The local council said a woman was killed while trying to make the crossing and no other attempts were recorded.

On the battlefront, Zelensky said Ukrainian forces were holding positions along the front line, including near Bakhmut, viewed as Russia’s next target in their advance through Donetsk.

In its evening report, the General Staff of the Ukrainian Armed Forces said Russian forces pressed for improved tactical positions to advance on Bakhmut and on the town of Avdiivka, just inside Ukrainian-controlled territory.

Russian forces trained tank and artillery fire on both cities and about eight other centers.

Andriy Yermak, Zelensky’s chief of staff, said on Telegram that five volunteers from the ex-Soviet state of Georgia were among those killed near Bakhmut.

Russian forces also shelled 25 settlements along front lines in the south, including the city of Kherson and Nikopol – on the Ukrainian-held side of the Kakhovka reservoir, opposite the Russian-held Zaporizhzhia nuclear power plant.

The mayor of Nikopol, Yevhen Yevtushenko, said one resident had died and urged residents to remain in underground shelters.

In a stark reminder of the human cost of the invasion, the Ukrainian parliament’s commissioner for human rights, Dmytro Lubinets, said more than 2.8 million Ukrainians had been deported to Russian territory since the invasion in February.