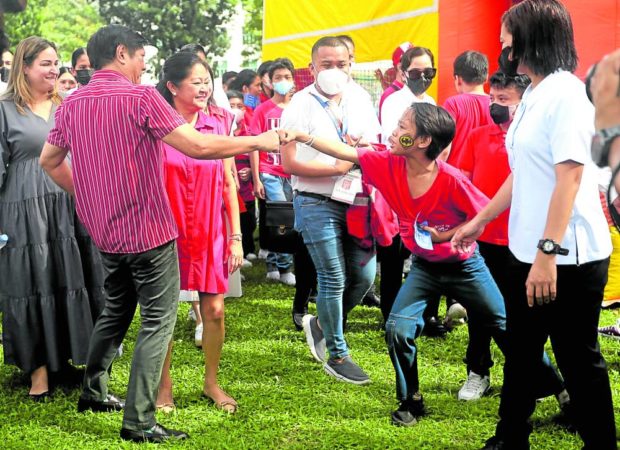 MANILA, Philippines — The gift-giving event that Malacañang hosted on Sunday for some 600 children was nostalgic for President Ferdinand Marcos Jr.

For a moment, he said the early morning Christmas event brought back memories of similar gatherings that his father, the late dictator Ferdinand Marcos, used to organize.

“That’s the stage for the magicians,” Marcos recalled, pointing to a portion of the Palace grounds where inflatable slides have been set up.“There were no inflatables then, only food and games.”

“I’m just continuing the tradition that was [started] during my father’s time. It was the funnest day, all the kids would come. I also used to join the games,” he said.

Marcos’ father and his mother, former first lady Imelda Marcos, were known for hosting lavish parties during the dictatorial regime while the country was languishing in poverty due to widespread corruption.

The president said the gathering on Sunday was actually part of a series of Christmas events, dubbed “Balik Sigla, Bigay Saya: Nationwide Gift-Giving,” conducted simultaneously in 40 different areas in the country.

The well-manicured Palace grounds were turned into a giant playground, complete with inflatable slides and different game kiosks usually found in the traditional Filipino “peryahan,” or amusement fair.

The peal of children’s laughter filled the usually quiet gardens of the country’s seat of power.

“Christmas will not be complete without seeing the joy and smile of our children and grandchildren,” Marcos told those who were invited to the event.

“This is a very, very happy day for me because this has been a tradition here at the Palace. We host a children’s party during Christmas,” he said.

“We’re also doing this so that we can somehow give our children a merry Christmas,” he added.

Accompanied by his wife, first lady Liza Araneta-Marcos, the president tried some of the games, including one that resembles a mix-up between football and darts.

“Let’s have fun. Party time for the kids!” he enjoined the participants.