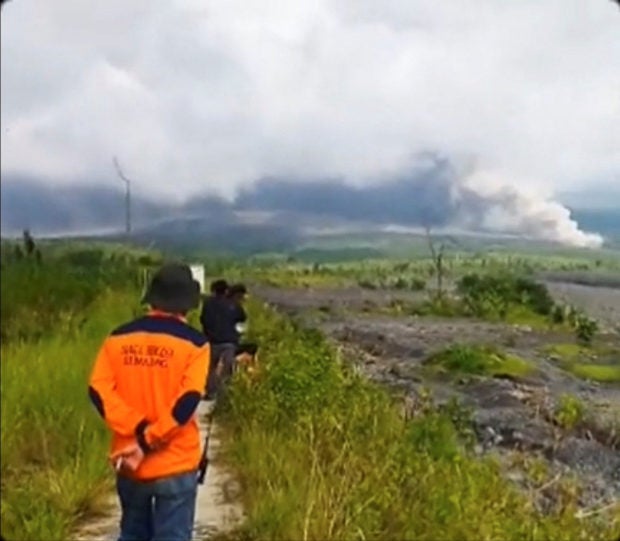 People look on as volcanic ash fills the sky during an eruption of the Semeru volcano in Lumajang, East Java Province, Indonesia December 4, 2022 in this screen grab obtained from a social media video. Instagram/@Gustiallah Foundation/via REUTERS

JAKARTA — Indonesian authorities raised the warning on Semeru volcano to the highest level on Sunday after an eruption spewed a column of ash high into the air, the country’s vulcanology agency said.

The evacuation of people, including children and seniors, living near the volcano in East Java province had also begun, said Abdul Muhari, spokesperson for Indonesia’s disaster mitigation agency, BNPB.

The plume from the volcano reached a height of 50,000 feet (15 km), said Japan’s Meteorology Agency, which was monitoring for the possibility of a tsunami there.

The eruption on the eastern part of Java island, some 640 km (400 miles) east of the capital Jakarta, follows a series of earthquakes on the west of the island, including one last month that killed more than 300 people.

Indonesia’s Center for Volcanology and Geological Hazard Mitigation, PVMBG, raised the level of volcanic activity to IV from III, its chief said in a text message.

With the raised alert level, authorities warned residents not to conduct any activities within 8 km (5 miles) of Semeru’s eruption centre, PVMBG said.

Some residents nearby have evacuated independently to safer buildings like mosques and schools, according to a statement from the regional government of Lumajang, where Semeru is located.

The regional administration banned activities near the volcano, including the movement of sand trucks, as they could affect evacuation process.

“Most of the road accesses have been closed since this morning. Now its raining volcanic ash and it has covered the view of the mountain,” Bayu Deny Alfianto, a local volunteer told Reuters by phone.

Small eruptions were continuing and it was raining in the area, he said.

The volcano began erupting at 2:46 a.m. (1946 GMT on Saturday), BNPB, said in a statement. Videos posted on social media showed grey ash clouds in nearby areas.

With 142 volcanoes, Indonesia has the largest population globally living in close range to a volcano, including 8.6 million within 10 km (6 miles).

The deadly late-November quake that hit West Java’s Cianjur was a shallow temblor of 5.6 magnitude. A much deeper quake on Saturday in Gurat of 6.1 magnitude sent people running from buildings but did not cause major damage.

Your subscription could not be saved. Please try again.
Your subscription has been successful.
Inquirer calls for support for the victims of Taal volcano eruption
Responding to appeals for help, the Inquirer is extending its relief to the families affected by the recent eruption of Taal volcano.
Cash donations may be deposited in the Inquirer Foundation Corp. Banco De Oro (BDO) Current Account No: 007960018860.
Inquiries may be addressed and emailed to Inquirer’s Corporate Affairs office through [email protected]