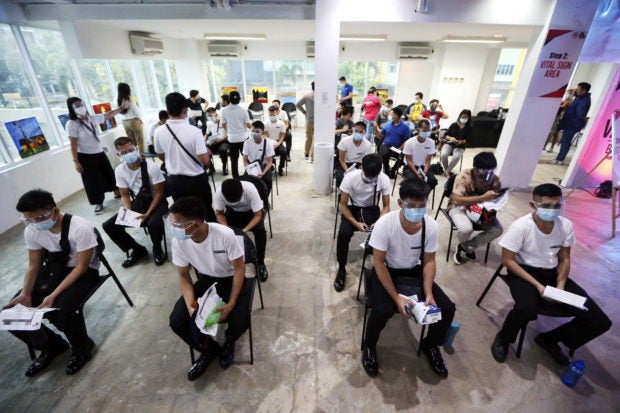 MANILA, Philippines — The House of Representatives will prioritize the passage of bills — including the proposed Magna Carta for Seafarers — that will benefit thousands of Filipino seamen.

House Speaker Martin Romualdez gave this assurance during the commencement rites of the Maritime Academy of Asia and the Pacific in Bataan on Friday.

In his speech, Romualdez said the Magna Carta for Seafarers is one of the 32 bills included in the common legislative agenda of the Senate and House.

This was agreed upon during the Legislative Executive Development Advisory Council meeting presided over by President Ferdinand Marcos Jr. in October.

There are 12 similar bills filed in the lower chamber which seek the enactment of a Magna Carta for Seafarers to institutionalize the protection of Filipino seafarers’ rights.

These measures are all pending before the House panel on overseas workers affairs.

“In fact, it was among the 32 legislative measures specified as a priority under the common legislative agenda of the Senate and the House of Representatives,” Romualdez said.

He added: “We seek to institutionalize the protection of Filipino seafarers’ rights to legitimate concerns, such as just terms and conditions of work and safe and secure workplace that complies with safety standards, free legal consultation and representation, and appropriate accommodation, recreational facilities, proper and adequate nutrition on board in order to protect and promote health and physical, emotional and psychological well-being of seafarers.”

A Magna Carta for Seafarers will mandate government agencies to improve the terms of employment, working conditions, and career prospects and opportunities for Filipino seafarers.

It proposes the adoption and implementation of anti-harassment and anti-bullying measures to protect seafarers and the extension of financial and credit assistance in times of pandemics and other emergencies.

It also mandates normal work and rest hours, paid annual leave, facilitation by the shipowner of the remittance of wages, limitations on wage deductions, social-welfare benefits, and medical care on board ships and ashore.

In 2020, over 217,000 Filipino seafarers were deployed overseas. The Philippines is the world’s main supplier of seafarers mostly employed in merchant ships or passenger vessels.

However, experts warned that more than 50,000 Filipino seafarers risk losing their jobs as future deployments might be banned after the Philippines failed to meet standards set by the European Maritime Safety Agency (EMSA).