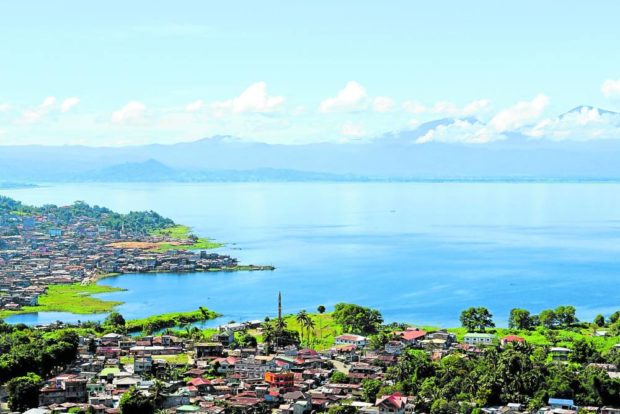 POWER SOURCES | The placid Lake Lanao before the Marawi siege in 2017, has been a cheap source of energy in Mindanao through the Agus hydropower plants. (Photo by ERWIN MASCARIÑAS)

DAVAO CITY, Davao del Sur, Philippines — Assistant Secretary Romeo Montenegro, deputy executive director of the Mindanao Development Authority (Minda), loves to remember the time, not so long ago, when electricity rates in Mindanao hovered at P6 per kilowatt-hour, the lowest in the country.

This was when hydroelectricity generated from the waters of Agus and Pulangi rivers made up the bulk of the region’s energy supply. The Agus and Pulangi plants had a combined installed capacity of 1,001.1 megawatts.

Pulangi IV in Maramag town, Bukidnon, has three generating units at 85 MW each, while the Agus complex comprises six plants with a total capacity of 746.1 MW. The waters of the 36.5-kilometer Agus River that snakes down from Marawi City in Lanao del Sur to Iligan Bay, come from the vast Lake Lanao, which has a surface area of 34,000 hectares, more than twice the land area of Quezon City.

Amid rising electricity demand, the government relied on fossil-based capacities to fill the gap, fueling the massive entry of coal-fired power plants into the Mindanao grid. And as they became dominant, Mindanao consumers had to bear rising electricity costs.

In Cagayan de Oro City, commercial power consumers of coal-dependent Cagayan Electric Power & Light Co. had to bear a 33-percent increase in cost, from P10.62 per kWh in January to P14.18 in July.

In contrast, the Davao Light and Power Co. (DLPC) billed commercial customers a lower rate, at most P13.4809 per kWh in August, and went down to P11.5634 in November. DLPC has a big bulk of hydropower in its retail mix, being the biggest contractor of power produced by the Agus and Pulangi plants, according to Montenegro.

Data from the National Grid Corporation of the Philippines (NGCP) showed that as of June 30 this year, the highest actual system peak demand in Mindanao was only at 2,167 MW, on June 1. Based on Minda’s economic projections, Mindanao will need an additional 3,000 MW generation capacity by 2030, and another 10,000 MW by 2040, and it wants these to be based on clean energy sources. It fixed an ambitious target of a 50 percent share of renewables in the region’s power generation mix. 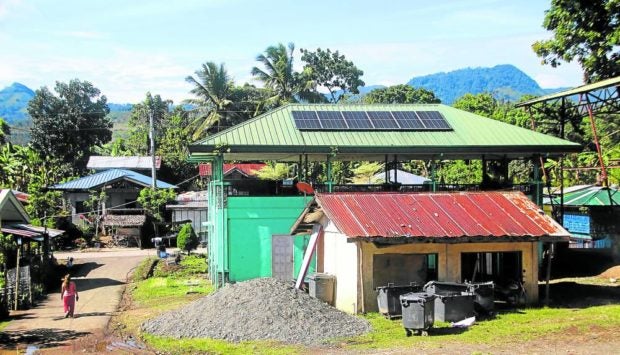 A solar-powered barangay hall in Marilog District, Davao City, is evidence of the immense potential of the sun in providing energy. (Photo by BARRY OHAYLAN)

In overturning the dominance of fossil-based capacities, Minda advocates an unconventional investment strategy.

“One way to increase the renewable energy capacity is to encourage successful multipurpose cooperatives in Mindanao, especially those with billions of assets already, to expand their portfolio by investing in small renewables, possibly in partnership with local governments or a joint venture with electric cooperatives in their areas,” Montenegro told local officials in a gathering of Mindanao Renewable Energy Advocacy and Coordination Hub in July. “This is the kind of design that we hope can be propagated,” he said.

Montenegro hopes for localities to build 2 MW or 3 MW capacities whether hydro, solar or biomass, whichever is technically viable in their areas, so these can add up to the projected requirement by 2030.

He also urged local governments to put up small renewable energy capacities to power their own needs, aside from promoting these in unserved and underserved communities.

According to Randell Espina, dean of the school of engineering and architecture at the Ateneo de Davao University (Addu), the target is achievable if the government stops accepting new investments in coal-fired power plants in Mindanao, and ensures the efficiency of the existing Agus and Pulangi hydropower plants. 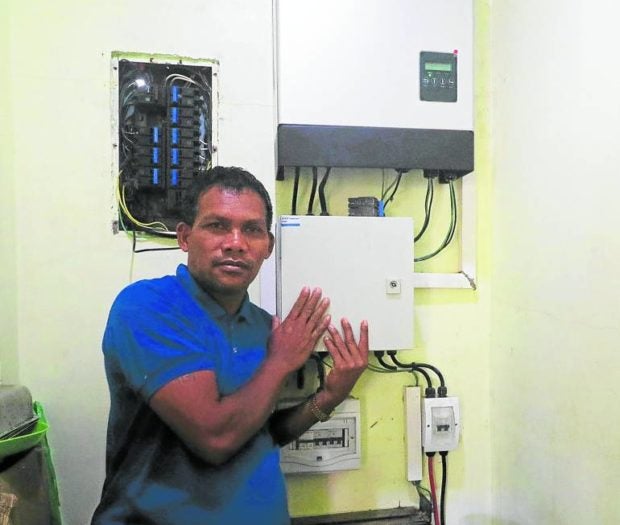 EFFICIENCY | Village chief Roberto Itdang of Barangay Salaysay, Davao City, shows the panel board below the inverter, which converts the direct current from the solar panels to alternative current that runs the appliances. (Photo by BARRY OHAYLAN)

As of December 2020, the Department of Energy said that the Agus and Pulangi plants had a combined dependable capacity of 844 MW although in the first six months of the year, these ran at most 669 MW, per NGCP data.

The aging facilities are up for rehabilitation and uprating, and there are efforts to build a seventh plant along Agus River in Baloi town, Lanao del Norte, that would add 255 MW of power generation capacity.

Espina also cited the need for policies that enable the growth of renewable energy capacities like incentives for installing photovoltaic (PV) panels on the rooftop of houses. With one-kilowatt peak capacity (kWp) panels on each house, Davao City could easily generate some 100 MW to 200 MW of electricity. “That’s already the minimum because one rooftop can accommodate up to 10 kWp PV panels,” he said.

Solar panels are the “most mature” renewable energy technology commercially available that can be optimized at present, said Nelson Enano, director of Addu’s Center for Renewable Energy and Appropriate Technologies and chair of the Ateneo-led research and development consortium Mindanao Renewable Energy R&D Center (MREC).

“If we could require all municipal halls, all government agencies to have solar PVs integrated into their energy systems, then it would definitely have a much bigger reduction on our dependence on fossil-based electricity,” he said. “They have rooftops, right?”

MREC has initially mapped out the potential energies that can be harvested in Mindanao, namely, the ocean, tidal and waves in Tawi-Tawi and Surigao provinces; solar in all areas; and wind in Camiguin and offshore on its western seaboard.

“Solar leads all the other energy potentials because of Mindanao’s place near the equator,” Enano said. 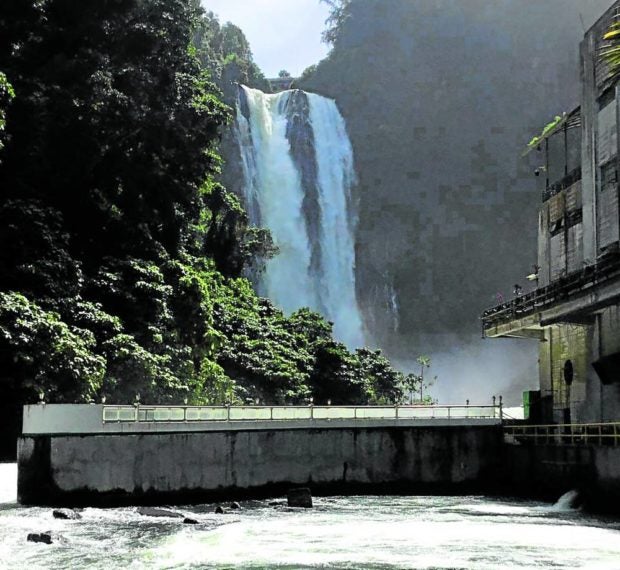 Power supplied to the grid is traditionally categorized as base, intermediate, and peaking loads. Base load is meant to satisfy the minimum energy demand and is often provided by large power plants that can assure constant and reliable production.

A peaking load comes in during the short duration when demand spikes and reaches its highest point within a given day; it is halted when demand recedes. An intermediate load transitions from base to peak.

But the regreening of the grid would require a change of paradigm, Enano said, where variable renewable energy sources like solar and wind are integrated as “must-run generators” that will be supported with readily dispatchable capacities to compensate for the fluctuation in production, hence avoiding energy shortfalls.

To provide ramping up capacity for the grid, hydroelectric generation capacities such as the one harnessing the Maria Cristina Falls in Iligan City can be converted into pumped storage hydropower (PSH) facilities that, according to the US Department of Energy, “store and generate electricity by moving water between two reservoirs at different elevations.”

In a PSH facility, water is used many times over as it is pumped from the lower to the upper reservoir when there are more capacities producing electricity. When other capacities are not available, water is released to the lower reservoir, turning the power turbines.

Alberto Dalusung III, energy transition advisor of the Institute for Climate and Sustainable Cities (ICSC), said that the report, Towards an Affordable and Reliable Grid with Energy Transition (Target), showed that while wind and solar capacities have variable energy production, these were predictable and could be integrated into the grid without causing problems.“If we are biased toward renewable energy, we can find ways to make things happen,” Enano said.

Already, the aim of saving on power costs among businesses, communities, and households is driving the growth of the renewables market in the region.

The rising cost of electricity prompts more people to turn to solar energy, said Cecille Rosalita, sales executive of Greenergy Development Corp., a renewable energy company based in Cagayan de Oro City. In Davao del Sur, people are paying as much as P15 per kWh of electricity, so it pays to invest in solar panels, which redounds to a 20 to 30 percent savings on electricity, she said.

In the remote community of Salaysay in Davao City’s Marilog district, on-grid solar panels installed through a grant from the Department of Science and Technology allowed villagers to save as much as 46.66 percent on their electricity bills each month, village chief Roberto Itdang said.

The village used to pay P3,000 monthly for electricity, but this had been reduced to about P1,600 after the PV panels were installed. The barangay hall uses the electricity from the grid during the day and turns on the solar battery at night to light the gym where young villagers play.

The gym, which is adjacent to the barangay hall, also serves as an evacuation area during times of emergencies. It was there where people sought refuge when they fled their homes in 2018, during intense fighting between government forces and communist rebels on the outskirts of the village. It’s also where they seek refuge during typhoons.

“The solar panels don’t easily get blown away during typhoons or strong winds,” Enano said. “In fact, they’re designed that way. They strengthen the roof. They’re also considered a climate adaptation instrument,” he added.

(Editor’s Note: Reporting for this story was supported by the Institute for Climate and Sustainable Cities under the Jaime Espina Klima Correspondents Fellowship)