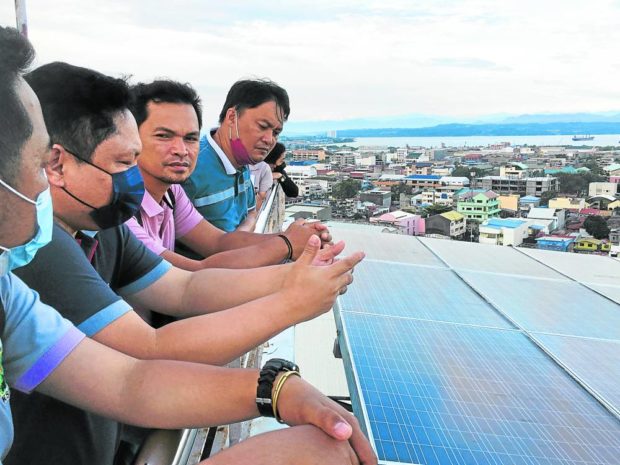 INTO THE FUTURE | Randell Espina (second from left), dean of Ateneo de Davao University (Addu) School of Engineering and Architecture, explains solar harvesting to visitors from different local governments who inspect the photovoltaic panels mounted on the rooftop of one of the university’s buildings. The panels on Addu rooftops are changing the Davao City landscape, as well as Mindanao’s energy future. (Photo by GERMELINA LACORTE / Inquirer Mindanao)

DAVAO CITY, Davao del Sur, Philippines — From the roof deck of the Blue Building of Ateneo de Davao University (Addu), Rene Sanchez of Sultan Kudarat’s Lebak town gazed down on the roof of the next building where solar photovoltaic (PV) panels had been installed.

Sanchez, the town agriculturist of Lebak, and others from the local government participating in a renewable energy workshop, took advantage of the remaining light from the setting sun to examine the panels and to consider using solar energy back home.

With a population of over 90,000, Lebak, like neighboring Kalamansig and Palimbang, badly needs a dependable supply of electricity as these towns are not yet connected to the Mindanao grid. A diesel-fueled power plant currently supplies the three towns.

Operated by the Small Power Utilities Group of state-owned National Power Corp. (NPC), the plant runs on a 2022 budget of P55 per liter. But the fuel cost skyrocketed to as high as P90 per liter due to the crisis in Ukraine, contributing to the company’s financial strain.

NPC required P1.2 billion in additional resources for this year in order to provide an uninterrupted power supply to off-grid areas throughout the country. Before a government subsidy was worked out, a financially bleeding NPC was forced to cut back on power generation in August, leading to 12-hour brownouts in Lebak.

Aside from being expensive, diesel fuel, like coal, heavily emits carbon dioxide and contributes to global warming that, in turn, spawns devastating typhoons.

Shifting to clean energy may be best for Mindanao, which had been recently battered by strong typhoons and extreme weather that brought communities flash floods, landslides, and storm surges. Lebak, for one, is still reeling from the destruction wrought by Severe Tropical Storm Paeng (international name: Nalgae) in October, with P116 million in damage to agriculture and crops.

The high cost of fossil fuels also provides a robust financial and economic justification for ramping up the share of renewables in the region’s energy mix. 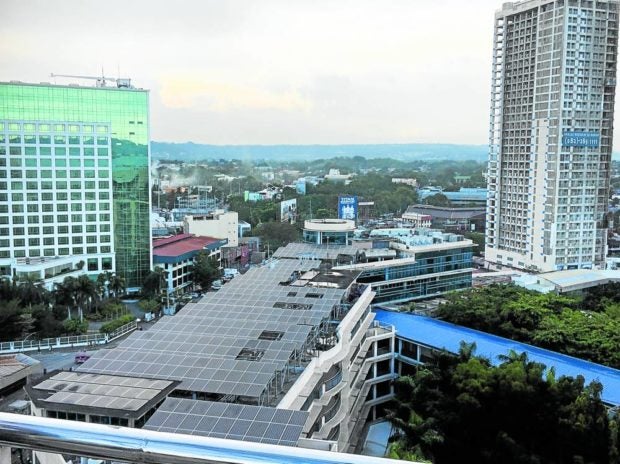 The solar panels on the roof of Addu’s Finster Hall were among the first that the university installed over a decade ago as it started advocating for renewable energy.

“During that time, the cost was still a problem,” recalled Randell Espina, dean of the Addu School of Engineering and Architecture. “But how can we convince people to convert to clean energy if we have nothing to show for it?”

The initiative gained a head start with the support of Fr. Joel Tabora, then university president. Addu mounted its first set of 48 solar panels in 2011. Later, it installed another set on two of its campuses so that today, the university has more than 2,582 panels on its three campuses. Together, they have a total capacity of 1 megawatt, supplementing the electricity the university takes from the grid.

Since then, solar makes up part of the energy that lights up the university classrooms and offices, and runs the air conditioners, refrigerators, computers and other electric equipment during daytime. It allows the university to save up to 30 percent on its electricity bills which, according to Espina, could amount to P800 to P1.2 million per month at the current P12 per kilowatt-hour price of electricity.

Addu engineers continue exploring other sources of renewable energy. They literally climb mountains and brave oceans to study the potentials of wind, hydro, tidal, ocean waves, and biomass technology to produce energy, according to Nelson Enano, director of the Addu Center for Renewable Energy and Appropriate Technologies.

They did not stop with the solar panels. Addu engineers are also exploring the sun’s other power — heat.

Addu hosts within its Bangkal campus its concentrated solar power (CSP) facility, whose parabolic dish is quite a sight to see. Unlike PV cells which convert light to energy in a solar panel, CSP uses mirrors to focus sunlight on a receiver which produces thermal energy to create steam that spins a turbine generator, producing electricity.

The CSP research, along with ocean renewable energies, is being pursued with the Mindanao Renewable R&D Energy Center (MREC), which is funded by the Department of Science and Technology (DOST). MREC is an Addu-led consortium of universities and colleges in Mindanao focused on the research and development of renewable energies.

The desire to understand renewable energy technologies and make them available and more affordable to local communities prompted the study, Espina said. 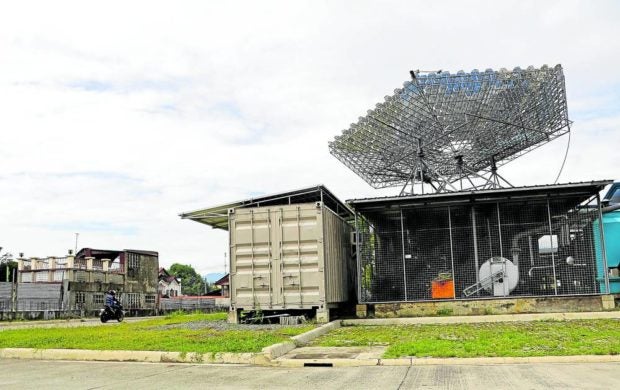 SOLAR POWER | The parabolic dish at Addu’s Bangkal campus in Davao city is another technology that captures heat from the sun to be converted into energy. (Photo by BARRY OHAYLAN)

Espina, who has a doctorate in energy systems engineering, said the country could only achieve an energy-secure future by making and using these renewable energy technologies locally.

“When we started with the solar panels, we realized that the technology is already there, we can buy it, but it’s not locally available (because we’re not producing it) and we’re not ready,” he said.

Producing these experts was the rationale for the university’s doctorate program on Energy Systems Engineering and its Master in Renewable Energy Engineering, which are the first in the country, according to Espina.

One project proposed for funding through MREC was the production of PV cells, he said.

“Our plan was to localize the solar cell technology,” he said. “The advantage of localization is we can customize the size and we can decide for ourselves and tailor it to our needs. We are no longer dependent on what is available in the market.”

But the proposal was not approved by the DOST, so Addu focused on CSP and ocean renewable energies.

“What’s good about having the CSP laboratory is you will get to know the technology, how it works and what are its limitations, and if it works in our setting and if not, what solutions and adjustments to make,” Espina said.

The success of these efforts will help wean Mindanao, if not the country, away from dirty energy, the impact of which haunts it back through extreme weather events.The Philippines’ per capita greenhouse gas emission is lower than the global and Southeast Asian averages, but it is one of the most vulnerable to extreme weather conditions and the other effects of climate change.

About a year after Addu installed its first solar panels, Typhoon “Pablo” (international name: Bopha) slammed into Mindanao on Dec. 4, 2012, packing 280 kilometer per hour winds.It caused widespread devastation and power outages on a large swath of Mindanao, killing 1,900 people and displacing thousands in a part of the country rarely visited by typhoons.

That time, Espina informed Fr. Tabora that solar panels would be handy in lighting up the devastated communities. The priest asked where they could find these panels.

“I told him, we already installed some on the university rooftop, and to our surprise, he ordered 25 of the solar panels to be taken down and temporarily lent to 25 devastated communities and villages, which had no power and water,” Espina recalled.

For six months after the typhoon, the panels lit up these communities, giving hope in the midst of darkness and despair. The panels proved so useful that Addu engineers proposed to the Davao City government to include solar energy in the preparations for calamity response.

Following successive destructive typhoons—Tropical Storm “Sendong” (international name: Washi) in 2011, Typhoon Pablo in 2012 and Supertyphoon “Yolanda” (international name: Haiyan) in 2013—environmentalists warned against the continued use of coal to generate power as it is contributing to global warming.

Despite this warning, coal-fired power plants mushroomed in Mindanao, as encouraged by the government. Some 2,063 MW of coal-fed capacity was added to the grid, from only 200 MW in 2006.

By 2017, the energy mix in the region had been reversed—from reliance on renewables to dependence on fossil fuels, according to Assistant Secretary Romeo Montenegro, Mindanao Development Authority deputy executive director.

Montenegro said Mindanao’s energy mix is accounted for by 50 percent coal and 20 percent diesel and other fossil fuels, leaving only 30 percent from renewable sources.

“Our energy supply in Mindanao comes from fossils. Why should it matter to us?” he asked. “It matters because the transition to dirty fuels resulted in a 20 to 25 percent increase in Mindanao’s electricity rates.”

“Now after the pandemic affected our local logistics, and the [conflict] in Ukraine, the price of coal spiked four times,” he said. “Let us regreen the Mindanao grid because right now, it is black.”

(Editor’s Note: Reporting for this story was supported by the Institute for Climate and Sustainable Cities under the Jaime Espina Klima Correspondents Fellowship.)