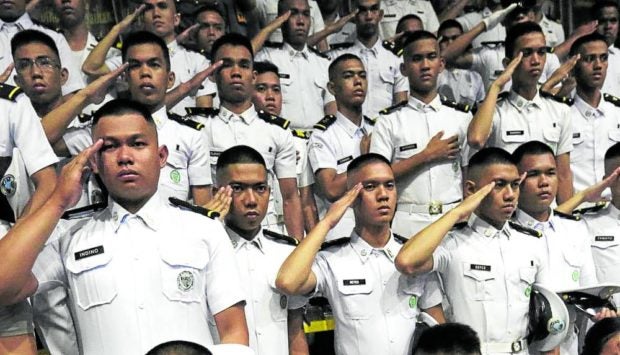 FILE PHOTO: Seafarers, such as these men in this photo taken September 29, 2019, during the 23rd National Seafarers’ Day in Manila, are at great risk of not being deployed to European Union-flagged ships due to the government’s continued failure to comply with the International Convention on Standards of Training, Certification, and Watchkeeping for Seafarers. INQUIRER/ MARIANNE BERMUDEZ

MANILA, Philippines — A bill that would establish a Magna Carta for Seafarers is among the priority proposed legislation at the House of Representatives.

Speaker and Leyte 1st District Rep. Ferdinand Martin Romualdez disclosed Friday this during the 20th commencement exercises of the Maritime Academy of Asia and the Pacific (MAAP) in Bataan province.

In his speech, he said that the proposed Magna Carta for Seafarers is one of the 32 bills specified under the common legislative agenda of the Senate and the House.

The 32 bills under the common legislative agenda were agreed upon during the Legislative-Executive Development Advisory Council (Ledac) meeting led by President Ferdinand Marcos, Jr. last October 10.

“In fact, it was among the 32 legislative measures specified as priority under the common legislative agenda of the Senate and the House of Representatives,” the House’s top leader said.

“Through this measure, we seek to institutionalize the protection of Filipino seafarers’ rights to legitimate concerns such as just terms and conditions of work and safe and secure workplace that complies with safety standards, free legal consultation and representation, and appropriate accommodation, recreational facilities, proper and adequate nutrition onboard in order to protect and promote health and physical, emotional and psychological well-being of seafarers,” he added.

To date, there is a bill filed by Davao City 1st District Rep. Paolo Duterte and Benguet Rep. Eric Yap — House Bill No. 1758 — which seeks to establish the Magna Carta for Seafarers.

If enacted, the said measure would require government agencies concerned to improve the working conditions, terms of employment, career prospects, and opportunities for Filipino seafarers.

According to the House website, Duterte and Yap’s bill is pending with the House committee on overseas workers affairs since August 2.

Romualdez also mentioned the proposed Maritime Education and Training Act and the International Maritime Instrument Domestication Act which both aim to establish the use of modern maritime education and training system and implement international standards in the maritime industry.

“In the field of education, the goal is to produce graduates who are globally competitive, hence, it is imperative that laws are enacted to improve the educational system, prepared for any internal and global crises that may come our way,” he said.

“I take the liberty of explaining these initiatives of the 19th Congress with you so are aware of what are in store for you after graduation and upon formal entry to the country’s workforce […] (The 19th Congress) will support your endeavors to provide quality education and topnotch graduates for the maritime industry,” he added.

The status of the maritime education and training in the country is a much-debated issue recently, after the country failed to meet standards set by the European Union — which experts said may lead to more than 50,000 Filipino seafarers losing their jobs as future deployments may be banned.

But while there are suggestions for a revamp in the curriculum or training regimen, several maritime schools and seafarers organization said that adopting a new education and training program would only spur confusion and worsen current conditions.

During the House committee on higher and technical education’s hearing last November 7, at least two industry leaders warned that House Bill No. 953 or the proposed Maritime Education and Training Act would be bad for the country’s bid to pass the Emsa evaluation.