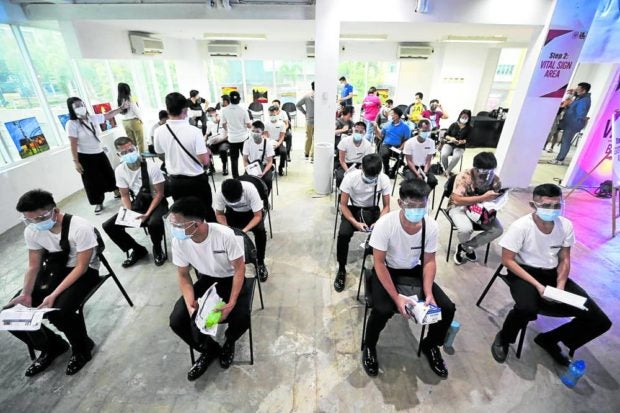 MANILA, Philippines — Representatives of maritime schools and seafarers’ organizations have warned that proposals seeking to adopt a modern maritime education and training regimen would only spur confusion and worsen current conditions.

During the House of Representatives’ Committee on higher and technical education hearing on Monday, at least two industry leaders warned that House Bill No. 953, or the proposed Maritime Education and Training Act, would be bad for the country’s bid to pass the European Maritime Safety Agency (Emsa) evaluation.

According to Filipino Association for Mariners’ Employment (FAME) vice president Jose Kato, the proposed measure would conflict with Republic Act No. 10635 —  the law that placed the Maritime Industry Authority (Marina) as the sole agency responsible for enforcing international standards in seafarer training.

“We do not support this bill for the simple reason that it will go in conflict with R.A. No 10635 which is the Marina Law, and also because of the Emsa situation right now — this will be adding another layer and we are afraid that it will add more complications to the existing problems right now,” Kato told the House panel.

The EMSA situation that Kato was referring to is the possibility that over 50,000 seafarers in European Union (EU) countries may lose their jobs — with future deployments banned too — if the country fails to pass the Emsa.

The Philippines, while being one of the largest sources of seafarers globally, failed to pass the Emsa for the last 16 years.

While Kato believes Marina must employ corrective measures to solve the Emsa issue, existing problems must be solved first before the country creates another policy.

“FAME, which is the biggest association of licensed manning agencies […] believe that Marina should do some corrective actions with regards the non-conformities as for the Emsa audit.  A very big chunk of the observations passed concerns maritime training and education, the curriculum, our officers, and to add another layer to this even if the intent is good and we laud the intent, will add more complications,” Kato said.

“So probably, we should finish first with our existing problems. Let Marina do its task and as a matter of fact, FAME has been offering technical assistance through its experts attending that various TWGs (technical working groups). So, we’d like to say that let’s simplify first our matters and let Marina do its duties as mandated by RA 10635,” he added.

Philippine Association of Maritime Institutions (Pami) president Czar Manglicmot II also said that while they acknowledge Congress’ efforts to modernize training standards for the maritime industry, they oppose the bill for the same reasons mentioned by Kato.

Also, Manglicmot admitted that several schools are already confused about what standards would be used, as Marina’s curriculum has been revised several times since he was president of Pami.

“I would like to make it clear and I would like to let everyone know that the schools are always in the bad light and viewed as the culprit here but be clear that what the school is doing, is only reflective of what regulations, provisions, that these different committees by Marina and CHed (Commission on Higher Education) have been providing,” Manglicmot said.

“In fact, since I became president, there has been already I think 3 or 4, in the last six years, changes in the Marina administrator and in those six years there have already been 4 changes of curriculum for the maritime education. Kaya po litong-lito na kami kung ano ang susundan namin (that’s why we are confused as to what curriculum we will follow),” he added.

“So, it’s really hard to manage different curriculums and this is the result of having separate committees. So, our fear is that an additional committee can bring more confusion to the mix. I do not know at this point if this can be a clear solution to our pressing problem right now,” he added.

House Bill No. 953 is not the first measure employed to improve the country’s training standards for seafarers.  The repeated failure of the country to pass the Emsa assessment has even prompted President Ferdinand Marcos Jr. himself to transfer seafarers’ training responsibilities from Marina to five other agencies including CHed. — With reports from Irish Perez, trainee