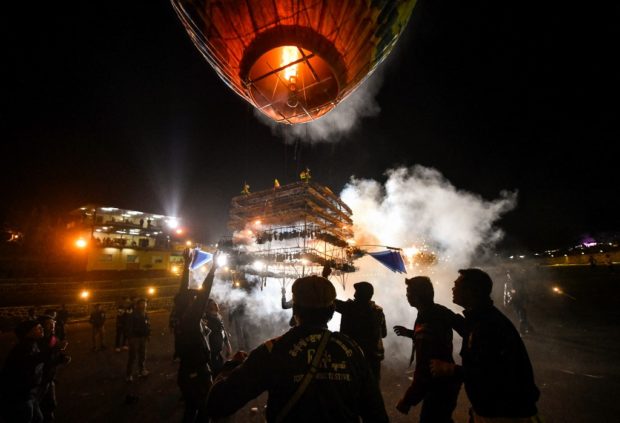 This photo taken on November 6, 2022 shows revellers releasing a hot-air balloon attached with fireworks during the Tazaungdaing Lighting Festival at Pyin Oo Lwin Township in Mandalay. (Photo by AFP)

Pyin Oo Lwin, Myanmar — Thousands of people have gathered in the hills of central Myanmar for the annual Tazaungdaing light festival that marks the end of the rainy season with a fiery nighttime display of exploding hot-air balloons.

The celebrations in the former British hill station of Pyin Oo Lwin have not been held for two years because of the Covid pandemic and unrest following a military coup.

But on Sunday night rival teams began launching 76 aerial artistic creations that will take flight over the next five days, competing for marks in aesthetics, teamwork, height reached and time spent in the air.

Their balloons were propelled upwards about 100 meters (320 feet) using the heat from a fire before fireworks inside exploded, obliterating months of work in a spectacular burst of lights across the inky sky.

The festivities are a rare respite from the economic misery and violence wracking much of the country almost two years after the military’s power grab.

“We are holding our festival here but we are sorry for what is happening elsewhere,” said Aung Myat Thu, 37, who spent months working with friends on their balloon.

“When we were preparing for the competition, we all worked alongside our worries.” 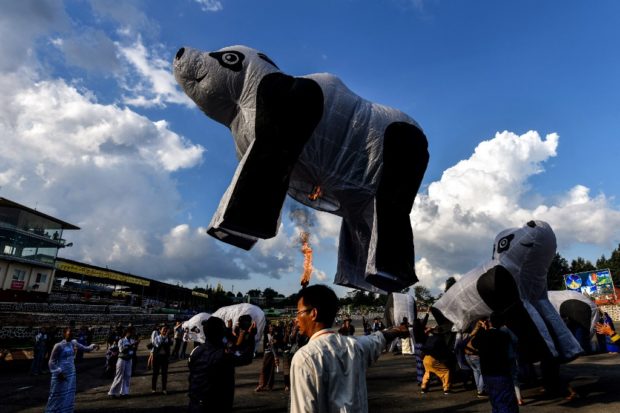 The hot-air balloons featured an array of artwork from images of Buddha to traditional motifs, with one made in the shape of a polar bear.

Some participants hooked dozens of red, white and yellow candles to their balloons before releasing them into the chilly night air to huge cheers.

Crowds ambled between stalls at a temporary fairground while traditional dancers performed.

While the Tazaungdaing tradition is rooted in Buddhism, the hot-air balloon contest was started by British colonialists in the late 19th century. 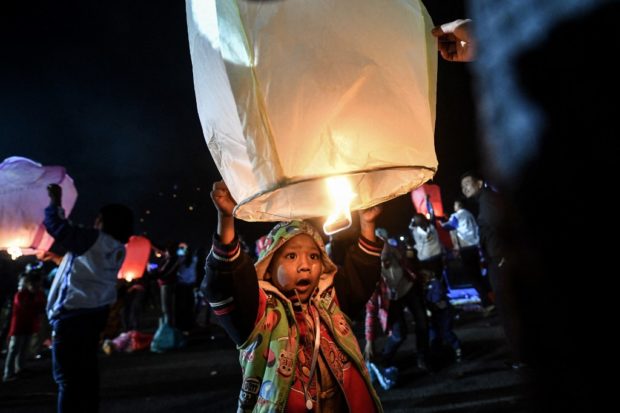 This photo taken on November 6, 2022 shows a boy releasing a small hot-air balloon during the Tazaungdaing Lighting Festival at Pyin Oo Lwin Township in Mandalay. (Photo by AFP)

Previous editions have drawn tens of thousands of local and foreign visitors, attracted by the colour — and danger — of the gathering.

The balloons are loaded with fireworks, and any miscalculation on when to light the rockets can result in catastrophe.

In 2014, three people were killed at Tazaungdaing celebrations in Taunggyi in neighboring Shan state when a balloon crashed onto spectators below.

Tin Mar Lwin, 41, was beaming Sunday night after sending off her balloon, which was decorated with a huge red and gold Buddha seated on a lotus leaf.

“I want the situation to be stable like this,” she told AFP of her country.

“I want peace. I’m hoping for it. I’m happy coming to this event.”