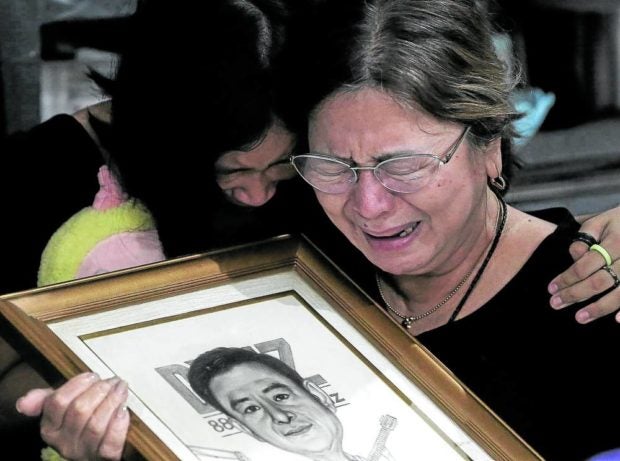 FILE PHOTO: Lisa Mabasa, a widow of slain radio broadcaster Percival “Percy Lapid” Mabasa, weeps at the family residence a day after her husband was gunned down in Las Piñas City on October 3, 2022. The family is demanding justice, saying the attack was not only against him but also against the country and the truth. INQUIRER/RICHARD A. REYES

The family’s statement came in light of the charges filed before the Department of Justice (DOJ) against Bantag, BuCor deputy security officer Ricardo Zulueta and other cohorts, including inmates or persons deprived of liberty, allegedly connected with the murder of Lapid, whose real name is Percival Mabasa, and supposed middleman Cristito Palaña – earlier referred to as Jun or Crisanto Villamor.

The family thanked the DOJ, the Department of the Interior and Local Government, as well as Mabasa’s supporters and listeners, for standing by them during their grief and pursuit of justice.

“We are optimistic, and asking for prayers and continued support for identifying more masterminds behind Bantag,” they added.

The family members then hailed the initiative to investigate into BuCor anomalies, which they said were earlier exposed by Lapid’s hard-hitting commentaries on his program “Lapid Fire.”

(We hope this launches efforts to strengthen the protection given to journalists who fight to tell the truth. As Percy used to say, “telling the truth is an obligation, not a form of strength.”)

Lawyer Berteni Causing, spokesman of the Mabasa family, also welcomed the development which, he called, a “big leap” in the case.

But he noted that the Lapid slay case is not yet over.

“We do believe that it does not end here. We are entertaining the possibility that there might be other persons involved, who we’re looking at as co-masterminds,” he said in an ambush interview at the DOJ.

Causing also bared their plan to consult with Justice Secretary Jesus Crispin Remulla on the administrative case their camp has been looking into filing against Bantag.