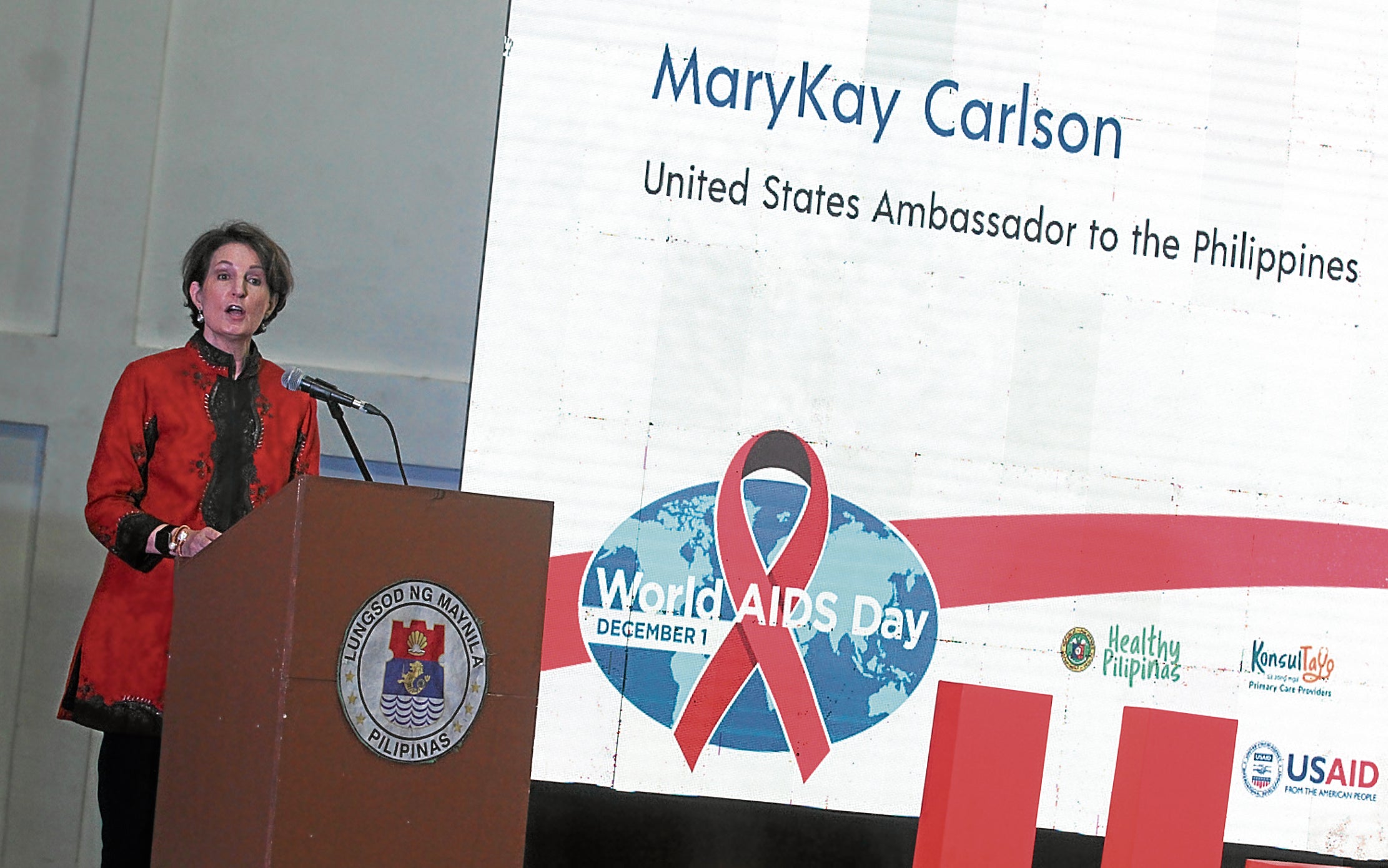 US EMBASSY DONATION American Ambassador MaryKay Carlson delivers a speech during the ceremonial handover of 86,000 HIV viral load cartridges donated by the United States government to the Department of Health and its local government partners on Thursday. —NIÑO JESUS ORBETA

The COVID-19 pandemic stalled efforts to control the spread of the human immunodeficiency virus (HIV), according to the Department of Health (DOH), as it noted that the health crisis and ensuing lockdowns hardly deterred “risky behaviors” that lead to HIV infections.

Dr. Jose Gerard Belimac, division chief of the DOH Disease Prevention and Control Bureau, said a DOH survey had revealed that the coverage of the government’s HIV prevention programs declined during the pandemic’s first year while high-risk behavior among key populations also persisted.

Citing the survey, he said the available prevention package that includes HIV testing, access to condoms and information on HIV awareness and prevention, decreased to 17 percent in 2020 from 26 percent in 2019.

“The big drop of prevention coverage was [in terms of] access of people to HIV testing because no one really [went out] of their homes to get tested or at least offer community-based testing at homes,” Belimac said.And despite the pandemic, he said, there was “no change in the risky behaviors of people.”

Those behaviors include unprotected sex or nonuse of condoms during sexual contact, having multiple sex partners and sharing of contaminated needles among people who inject drugs. HIV is also transmitted from an infected mother to her child during pregnancy.

The DOH identifies men who have sex with men (MSM) and transgender men and women as the sectors most at risk for HIV infection.

Belimac said the survey findings prompted the DOH to craft a national HIV and AIDS (acquired immunodeficiency syndrome) plan because “we were worried back then that there were few people … who are undergoing ART (antiretroviral therapy).” ART is a prescribed medication regimen for people living with HIV—or PLHIV—to slow down their progression to AIDS, the most severe stage of HIV infection.

Belimac said that under the program, the government and stakeholders will develop more facilities for conducting the rapid HIV diagnostic algorithm (rHIVda), a test known for its higher accuracy, specificity and sensitivity in HIV diagnosis.

As explained in DOH literature, HIV is an infection that attacks the CD4 cells, a type of white blood cells that maintain the body’s immune system. When untreated, HIV can lead to AIDS, which is the breakdown of the body’s defense against infection.While there is still no known cure for HIV, the viral load in a PLHIV can be kept at bay through regular blood tests that measure the amount of the CD4. A normal CD4 count is 500 to 1,500 cell/milliliters (mm^3) ; a drop to below 200 cells/mm^3 is an indication of AIDS.

Meanwhile, on Thursday, in observance of World AIDS Day, the US Embassy in Manila donated some 86,000 HIV viral load testing cartridges to the Philippine government to beef up local HIV treatment programs.

The HIV/AIDS/STI (sexually transmitted infections) surveillance and information unit of the DOH epidemiology bureau reported that 42 people were diagnosed with HIV daily from January to October this year. In October alone, 1,383 people were confirmed to have HIV, bringing the total case count in 2022 to 12,859.Of the total case tally in October, 97 percent was acquired through sexual contact; 75 percent were MSM. There were 65 reported deaths, majority were age 25 to 34.Around 66,000 PLHIV with a median age of 32 are currently enrolled in ART, the same data showed.

The country’s HIV epidemic, which began with a few cases in 1984, had been declared a national emergency since 2017 due to the rapid rise in infections. Since 1984, the DOH has recorded more than 96,000 cases, but said the number could be higher due to low testing coverage.

The 2021 Young Adult Fertility and Sexuality Study of the University of the Philippines’ Population Institute noted that HIV awareness among the youth age 15 to 24 dropped to a 27-year low at 76 percent. It reflected a 19-percentage-point drop from 95 percent in 1994.

Of this age group, 52 percent believed that a person can acquire HIV by sharing food with an infected person, while 40 percent did not believe that a “healthy-looking person” can get HIV.