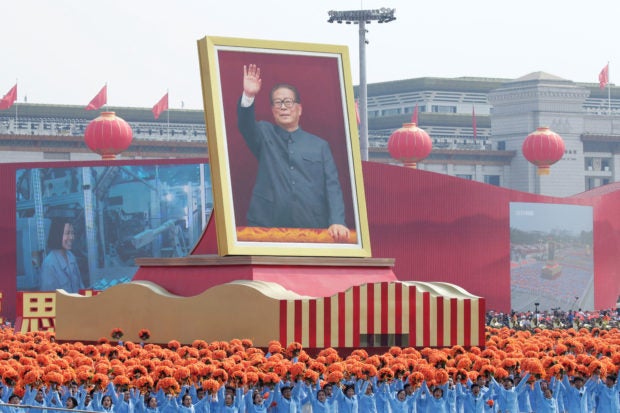 Performers travel past Tiananmen Square next to a float showing former Chinese president Jiang Zemin during the parade marking the 70th founding anniversary of People’s Republic of China, on its National Day in Beijing, China October 1, 2019. (REUTERS/File Photo)

BEIJING  – Former Chinese President Jiang Zemin, who led the country for a decade of rapid economic growth after the Tiananmen crackdown in 1989, died on Wednesday at the age of 96, Chinese state media reported.

Jiang died in his home city of Shanghai just after noon on Wednesday of leukaemia and multiple organ failure, Xinhua news agency said, publishing a letter to the Chinese people by the ruling Communist Party, parliament, Cabinet and the military.

“Comrade Jiang Zemin’s death is an incalculable loss to our Party and our military and our people of all ethnic groups,” the letter read, saying its announcement was with “profound grief”.

Jiang’s death comes at a tumultuous time in China, where authorities are grappling with rare widespread street protests among residents fed up with heavy-handed COVID-19 curbs nearly three years into the pandemic.

The zero-COVID policy is a hallmark or President Xi Jinping, who recently secured a third leadership term that cements his place as China’s most powerful leader since Mao Zedong and has taken China in an increasingly authoritarian direction since replacing Jiang’s immediate successor, Hu Jintao.

China is also in the midst of a sharp economic slowdown exacerbated by zero-COVID.

Numerous users of China’s Twitter-like Weibo platform described the death of Jiang, who remained influential after finally retiring in 2004, as the end of an era.

“I’m very sad, not only for his departure, but also because I really feel that an era is over,” a Henan province-based user wrote.

“As if what has happened wasn’t enough, 2022 tells people in a more brutal way that an era is over,” a Beijing Weibo user posted.

The online pages of state media sites including People’s Daily and Xinhua turned to black and white in mourning.

Jiang was plucked from obscurity to head China’s ruling Communist Party after the bloody Tiananmen crackdown on pro-democracy protesters in 1989, but broke the country out of its subsequent diplomatic isolation, mending fences with the United States and overseeing an unprecedented economic boom.

When Jiang retired, it was said by sources close to the leadership at the time that everywhere Hu looked he would see the supporters of his predecessor.

Jiang had stacked China’s most powerful leadership body, the Politburo Standing Committee, with his own protégées, many of them from the so-called “Shanghai Gang”.

But in the years after Jiang retired from his final post, the military commission chairmanship in 2004, Hu consolidated his grip, neutralised the Shanghai Gang and successfully anointed Xi as a successor.