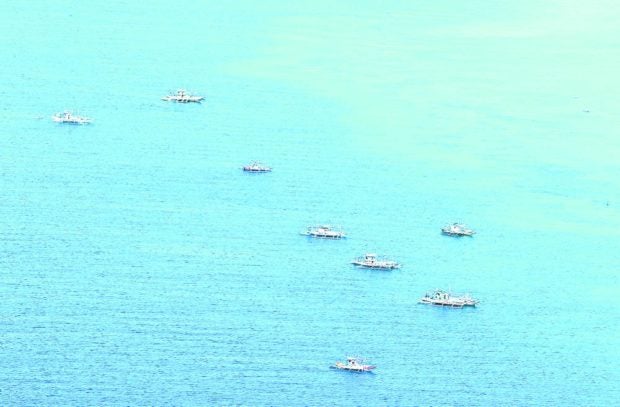 Filipino fisherfolk ply their trade in Panatag (Scarborough) Shoal earlier this month, although some have complained of being harassed by Chinese Coast Guard ships, making them feel like thieves in their own backyard. (File photo by GRIG C. MONTEGRANDE / Philippine Daily Inquirer)

In a statement, Pamalakaya said House Bill No. 6373 filed by Rep. Edward Hagedorn last week would have a direct impact on the livelihood of municipal fisherfolk instead of preventing Chinese and other foreign poachers from entering the country’s territorial waters.

Hagedorn wants the Kalayaan Island Group and Scarborough (Panatag or Bajo de Masinloc) Shoal, and the three nautical miles around them declared as a protected area.

According to the lawmaker, the government should prioritize the protection of natural resources in the West Philippine Sea, citing the “significant environmental degradation” in the disputed waters.

“We must learn to cooperate as one region in the protection of our natural resources while we settle the territorial disputes in the West Philippine Sea,” Hagedorn said in a statement on Nov. 25.

“While we acknowledge the objective of the bill to protect the major features in the West Philippine Sea against destructive fishing practices, we fear that this might sweepingly cover small fishers, as the proposed marine protected areas will be within the municipal waters,” Hicap said.

According to the group, the proposed law could restrict Filipinos from their traditional fishing grounds, “while actually failing to prevent China and other foreign fleets from conducting large-scale fishing, among other destructive activities beyond the municipal waters.”

Hicap said local conservation measures would be “unnecessary” if only the Marcos administration effectively upholds the arbitral ruling recognizing the Philippines’ exclusive economic zone in the West Philippine Sea.

“There would be no need to explore risky alternative measures because there’s already the international tribunal, which is actually our strongest legal claim that we could enforce against China’s continued usurpation of our territorial waters,” Hicap said.

He said the arbitral ruling would need “decisive action” and “sincerity to uphold sovereignty and territorial integrity” from the Marcos government.

Pamalakaya said it would study the House bill and consult fisherfolk in Southern Tagalog and Zambales province, as well as with marine scientists to determine the potential impacts of the measure.