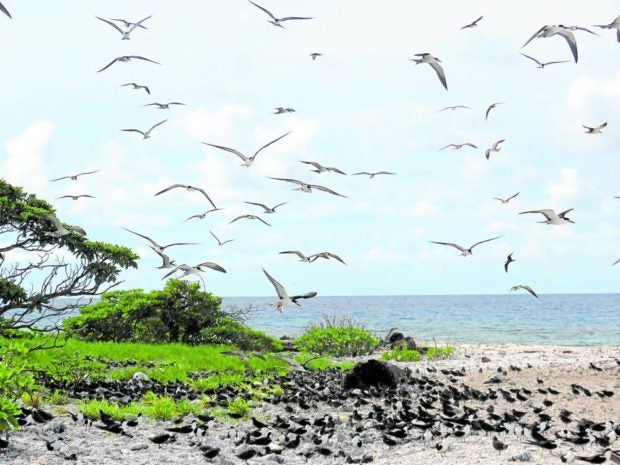 BIRD SANCTUARY Lawak Island, located 98 miles (157.7 kilometers) east of Pag-asa Island in the West Philippine Sea, is a bird sanctuary and one of the islands claimed by the Philippines in the disputed territory. Only a military detachment can be found on the island, maintained by the Armed Forces’ Western Command. The Palawan Council for Sustainable Development, an office under the Department of Environment and Natural Resources, declared the island a protected area on Sept.8. —PHOTO COURTESY OF PALAWAN COUNCIL FOR SUSTAINABLE DEVELOPMENT

PUERTO PRINCESA CITY — Citing the global significance of the ecosystem and marine biodiversity of the West Philippine Sea (WPS), an expert on environmental policy and governance has recommended that this area be declared a protected seascape.

Dr. Ben Malayang III, professor emeritus of Environmental Policy and Governance Institute of Environmental and Marine Science at Silliman University in Dumaguete City, said the WPS ecosystem services must be protected “at all cost.”

“[The WPS ecosystem services] generate unique and irreplaceable ecological, economic, and social benefits (and values) that are natural heritage—a universal commons—of Filipinos, of others around the South China Sea (SCS), and of the world,” Malayang said when he spoke about the heritage value of WPS during the second Marine Protected Area Summit held in this city on Monday and Tuesday.

Palawan province’s Kalayaan town, with Pag-asa Island as its seat of local government, is located in the WPS, which comprises around 30 percent of the Philippine seas and around 20 percent of the total area of SCS.

Only on Sept. 8, the Palawan Council for Sustainable Development (PCSD) adopted Resolution No. 2022-827, declaring the 7.93-hectare Lawak Island, which is part of the Kalayaan Group of Islands claimed by the Philippines in the WPS, as a protected area.

The PCSD, an attached agency of the Department of Environment and Natural Resources, cited the threatened resident birds, and a potential green sea turtle nesting site on Lawak Island, which is home to at least six bird species and other wildlife.

Malayang said the Philippine government was affirming its legitimate jurisdiction over the WPS as “a clear and uncompromisable national interest of all Filipinos” despite contending territorial claims in the SCS.

But he said protecting the ecosystem services of the WPS from the perspective of science is “a concern more foundational to human beings than territory.”

“While others are looking at WPS for its territorial jurisdiction, we look at its ecosystem services. It is a concern of all who value WPS and SCS as maritime domains,” Malayang said.

He added: “On this ground, it is recommended that, using existing mechanisms and procedures, WPS or any of its parts, like the Kalayaan Island Group and Bajo de Masinloc (in Zambales province), be declared as a Philippine protected seascape.”

He also said the government should move for the inclusion of the WPS ecosystem services in the Association of Southeast Asian Nations Heritage Park Protected Area system, and in the United Nations Educational Scientific and Cultural Organization’s World Heritage List.

Malayang explained that based on a framework of heritage evaluation, the WPS qualifies as an important seascape under Republic Act No. 7586, or the National Integrated Protected Areas System Act of 1992. —GERALD TICKE