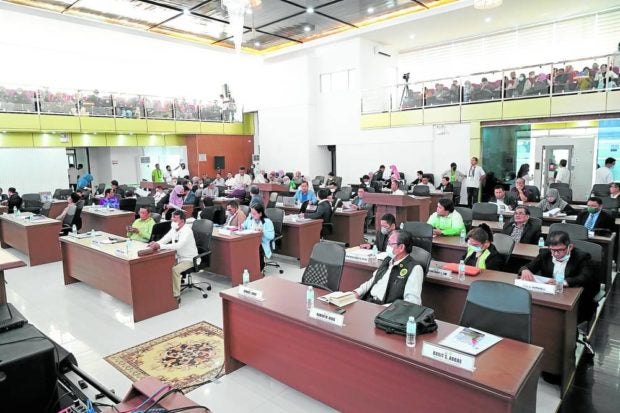 COTABATO CITY — Two of the four remaining priority legislation that will make the Bangsamoro government functional beyond its transition period were filed before the Parliament of the Bangsamoro Autonomous Region in Muslim Mindanao (BARMM) on Thursday.

Lawyer Sha Elijah Dumama-Alba, floor leader of the Bangsamoro Transition Authority (BTA), presented Parliament Bill No. 29, also known as the Bangsamoro Electoral Code of 2022, for first reading during the Parliament’s session on Thursday.

The measure prescribes the structural, functional and procedural principles in the elections of officers within the BARMM and ensures the holding of honest, credible, just and free elections in the region.

Dumama-Alba also refiled PB 30, or the proposed Bangsamoro Local Governance Code (BLGC), that was filed before the BTA Parliament in July 2020 but which remained pending at the committee on local government. The committee had started public consultations with local governments, academe, religious sector, indigenous peoples (IPs), non-Moro settlers and other stakeholders in Lanao del Sur and the cities of Marawi and Cotabato before it ran out of time when the first BTA Parliament adjourned in July.

According to the proposed bill, the BLGC will provide a clear direction between the local governments and BARMM, and will strengthen the supervisory power of the latter through the Ministry of the Interior and Local Government.

BARMM Chief Minister Ahod “Al Haj Murad” Ebrahim committed to pass the codes either before the year ends or by the first quarter of 2023 during President Marcos’ visit here on Sept. 15, the inauguration of the second BTA Parliament.

Ebrahim, who was reappointed BARMM Chief Minister during the extended transition period, said that setting up a fully functional autonomous government would not only ensure a peaceful and orderly elections in 2025 but would also help transform BARMM into a progressive and responsive region.

On the first day of session, the newly elected Parliament will elect among themselves, and by a simple majority, the Chief Minister, who will then nominate two deputy Chief Ministers, who will be elected by the members of the Parliament.

For the party representation seats, only parties getting at least 4 percent of the total valid votes cast in party system elections are guaranteed a seat.

At least two seats will be reserved for representatives of non-Moro IP and settler communities.

The sectoral representatives will be chosen by the Chief Minister after nomination by the Parliament through the Speaker from among the members of registered sectoral organizations.

Marcos calls for unity of all Bangsamoro leaders