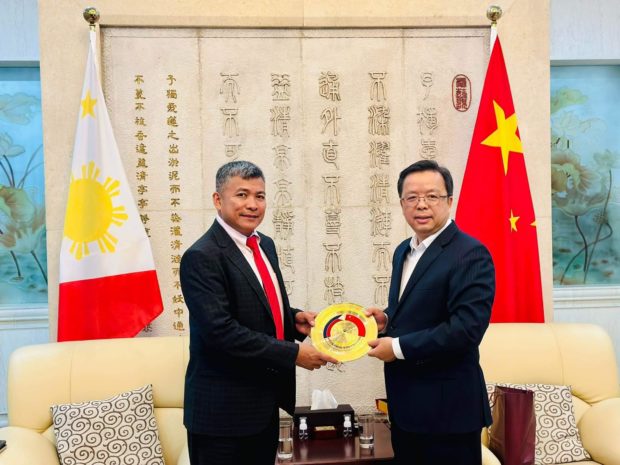 The meeting, which was upon Huang’s invitation, took place just three days after Harris’ three-day trip to the Philippines that included a tour aboard a PCG patrol ship docked in Palawan.

Abu said he requested the ambassador “to tell China Coast Guard (CCG) not to make dangerous maneuvers to PCG vessels in the West Philippine Sea (WPS) and he acceded.”

Both officials also discussed a review of its “arrangement on establishing communications hotline,” which was established during a joint coast guard committee meeting in 2017.

Abu said he also asked Huang to consider the pledge of coast guards during the Asean (Association of Southeast Asian Nations) Coast Guard Forum in Indonesia that they would serve as driving forces in advocating peace, security and stability in the region, as well as enhance mutual trust, strengthen cooperation in upholding maritime security and safety.

“I told him that he might find it worth considering, because those are the general view of coast guards of neighboring nations in the region,” he said.

The two sides agreed on “promoting friendship, living up to the spirit of good neighborhood and assisting each other in times of distress at sea,” Abu told the Inquirer on Sunday.

The Philippine government has filed hundreds of protests over the harassment and intimidation of its troops and Filipino fisherfolk by Chinese vessels in the West Philippine Sea. China claims to own nearly the entire South China Sea, including the WPS, which the 2016 arbitration ruling in The Hague said had no legal basis.

The Inquirer witnessed in June the dangerous maneuvers of Chinese coast guard vessels toward two supply boats on a resupply mission to Ayungin (Second Thomas) Shoal in the WPS.

The CCG ships aggressively tailed the two boats and warned the troops on the grounded BRP Sierra Madre, a rusting warship that serves as a detachment, of “consequences” if they insist on “making trouble” although they were in the Philippines’ exclusive economic zone.