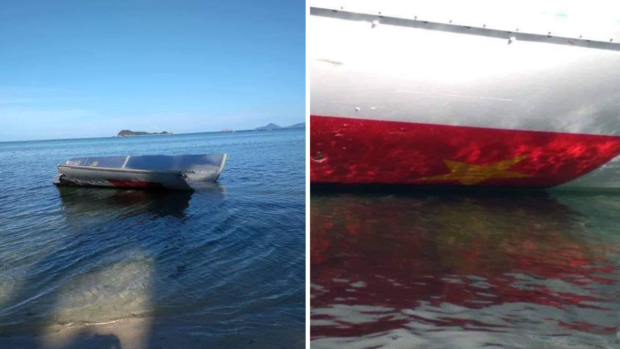 DROP ZONE Wreckage found in waters off Palawan on Tuesday had such features as a painted image of a yellow star inside a red rectangle. China had earlier warned that debris would fall to Earth from a rocket it launched last week. —RANIELMONTILLA/CONTRIBUTOR

A wreckage from a rocket carrying payload to China’s Tiangong Space Station was found on Monday in the waters near Busuanga Island in Palawan province.

China’s Civil Aviation Administration (CAA) had earlier issued a global advisory saying that “expected unburned debris” was due to drop to Earth after its Long March 5B rocket was launched on Oct. 31 to transport a module to the space station.

Tiangong is in low orbit some 340-450 kilometers above Earth’s surface.

The Philippine Space Agency (PhilSA), in its own advisory that day, said the CAA had identified the areas of Panatag (Scarborough) Shoal and Busuanga, Palawan, as the two drop zones of the wreckage.

PhilSA said these were “components” that detached from the rocket “minutes after the launch.”

These “are designed to shed over bodies of water to minimize the hazard of falling in populated areas,” the agency said, adding that the rocket debris was “unlikely to fall on land features or inhabited areas in the Philippine territory.”

“[But] falling debris still poses a considerable risk to ships, aircraft, fishing boats, and other vessels that will pass through the drop zones,” PhilSA said.

Apart from those components, international aviation and space authorities were also tracking over the weekend the Long March 5B rocket, which was also expected to fall to Earth.

The projectile weighed 20 tons, according to an update on Twitter by Tiangong Space Station—although various news reports pegged the rocket’s weight between 23 and 25 tons.

The US Space Command, also tweeting on Friday, said the “Long March 5B rocket [had] re-entered the atmosphere over the south-central Pacific Ocean.”

But there was nothing further since that tweet, which also advised that “For details on the uncontrolled reentry’s impact location, we once again refer you to the #PRC (People’s Republic of China).”

Tiangong confirmed the US Space Command’s update, adding that at least one country, Spain, had briefly closed its airports “amid debris trajectory above its airspace.” Yet there was also no further advisory since.

In Barangay Cheey, Busuanga, resident Raniel Montilla, who is also “mandatory representative” of the Tagbanua Tandulanen indigenous peoples in that island, took photos of the debris on Tuesday copies of which were obtained by the inquirer.

The photos show, among other features of the wreck, a silver and white sheet of slightly curved metal lying on shallow water near the shore, and another sheet on which is painted a yellow star inside a red rectangle.

Palawan Board Member Juan Anton Alvarez said the image “looks like the Chinese flag.” In a privilege speech at Tuesday’s session, he called for an investigation by the military’s Western Command (Wescom), which covers Palawan and areas of the West Philippine Sea being disputed by China.

But Wescom could not say that the wreckage was from a Chinese rocket, as this should be determined by “appropriate inter-agency action,” explained the command’s spokesperson, Maj. Cherryl Tindog.

She said further that the “debris did not cause any casualty and does not pose any danger.”

Residents of Cheey initially held on to the remnants of the rocket before these were taken by members of the Navy who visited the village.

Elizabeth Cervantes, mayor of the town named after the island, said in a text message when reached for comment: “The debris will be taken to Coron town [some 48 km away from Busuanga], where there is a PN (Philippine Navy) ship on standby for proper disposition.” INQ