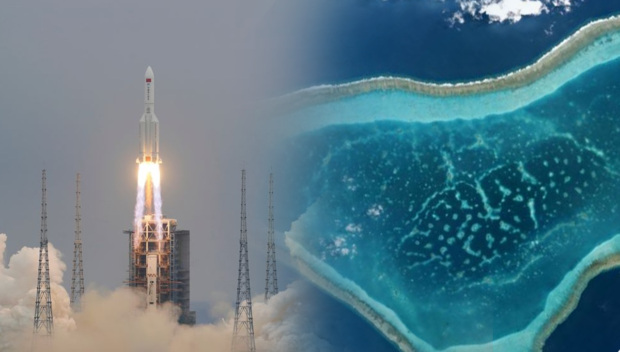 SAN ANTONIO, Zambales — The Philippine Space Agency (PhilSA) on Monday evening cautioned the public against the possibility of floating debris from a Chinese rocket launched on Oct. 31.

An advisory from the PhilSA said the rocket was launched at 3: 37 p.m. Philippine time from Wenchang Space Launch Center on China’s Hainan Island.

The PhilSA said the rocket carried the Mengtian laboratory module for the Tiangong space station, a research facility being built by China in orbit.

Citing the Notice to Airmen issued by the Civil Aviation Administration of China to the Civil Aviation Authority of the Philippines, PhilSA said the identified drop zone 1 was about 72 kilometers from Bajo de Masinloc, locally known as Panatag or Scarborough Shoal.

The shoal is about 240 km from the coastline of Zambales.

PhilSA said drop zone 2 was some 39 km from Busuanga town in Palawan province.

“Anticipated to fall within these areas are the ‘expected unburned debris,’ or parts of the rocket designed to be discarded as the rocket enters outer space,” PhilSA said.

It said these components get separated from the rocket minutes after the launch and are designed to float over bodies of water to minimize the hazard of falling into populated areas.

Although PhilSA noted that debris from Long March 5B would unlikely fall on land features or inhabited areas in Philippine territory, falling debris would still pose a “considerable risk” to ships, aircraft, fishing boats, and other vessels that would pass through the drop zones.

“Actual drop zones may also vary because of various factors such as the Earth’s rotation, weather, and climate conditions,” it said.

It added: “[The debris can also] float around the area and wash toward nearby coasts.” INQ

Why all the fuss over falling debris from China’s most powerful rocket?