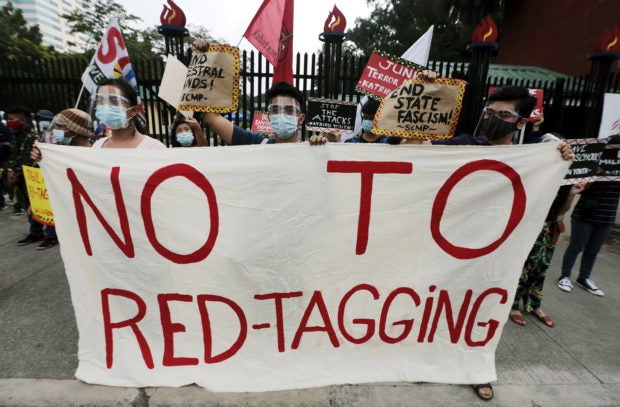 IMPORTANT CALL In this photo taken in December 2020, a group of “lumad” (indigenous peoples) students and their supporters call on the government to stop Red-tagging amid attacks on schools supported by groups that the military and local officials claim to have links to communist rebels. —GRIG C. MONTEGRANDE

MANILA, Philippines — Three members of a Protestant church on Monday sought Supreme Court protection from alleged red-tagging and harassment by top officials of the Armed Forces of the Philippines, particularly a division of the Philippine Army, while they also named the military chief as respondent on the basis of command responsibility.

Couple Edwin and Julieta Egar, both pastors of the United Church of Christ in the Philippines (UCCP), and lay leader Ronald Ramos filed a petition for writ of amparo and a temporary protection order against the military brass.

A writ of amparo is a remedy available to any person whose right to life, liberty and security is violated or threatened with violation by an unlawful act or omission of a public official or employee, or of a private individual or entity.

The petitioners claimed they were accused of “giving aid to communist insurgents” and were included in a list of alleged New People’s Army (NPA) rebels by a division of the Philippine Army.

In their petition, the Egars and Ramos claimed that, “in doing their ministry work for the [G]ospel, [they were] falsely alleged, despite the utter lack of evidence, to be giving aid to communist insurgents by the respondent… officers and enlisted personnel of the 59th Infantry “Protector” Battalion stationed in Rosario, Batangas[,] and in the various 59th IB detachments across Quezon province and Batangas.”

The petition alleged further that the 59th IB “conducted military surveillance/military reconnoiter of petitioners despite petitioners being civilians [and] intimidated and gravely coerced [them] to surrender and admit [to] being…(NPA) members despite the lack of any evidence and their outright refusal to divulge alleged evidence.”

“[T]here is an outright threat of a military operation directed against [our] li[ves], liberty and security,” the petitioners said.

They added: “Due to these illegal military surveillance, unwarranted visits, threats of illegal searches, and the outright threat of a deadly military operation akin to the Bloody Sunday operations, the respondent… officers and enlisted personnel of the 59th IB have implanted a genuine and crippling fear in the minds of petitioners.”

The Egar couple and Ramos were referring to the simultaneous police and military operations on March 7, 2021, which led to the killing of nine activists—an episode since called “Bloody Sunday.”

“Now, the petitioners are living in fear wondering whether tomorrow will be their last. They have also yet to be able to return to their homes for fear that instead of [residing] in a safe haven, they would be endangering themselves more by being open targets for the respondent… officers and enlisted personnel of the 59th IB,” the petition said.

Gilbert Andres, one of the lawyers from the Center for International Law whom the petitioners sought to represent them, claimed that Ramos had received text messages warning him that “there would be a military-police operation like the Bloody Sunday military operation.”

Andres also noted that his client is a former barangay captain.

Enumerated in Ramos’ petition together with the Egars were several instances which allegedly showed the respondents threatening or intimidating him—such as “[R]ed-tagging… through [his] inclusion… in a list of ‘persons of interest [by] the military,’” as also posted on the Facebook page of the 59th IB; the respondents’ “insistence that he surrender… and admit that he is a member of the NPA”; and “the constant and consistent refusal of the respondents to show [him] any documentation to substantiate their [R]ed-tagging.”

In their appeal for a temporary protection order, the petitioners asked the high court to bar the respondents from entering a one-kilometer radius of their residence or work address and from communicating directly or indirectly with the petitioners.

They requested further the protection of their families by a private institution capable of securing their safety.

The petitioners also asked the court to direct the respondents or anybody who has evidence relevant to their petition to produce such evidence and allow its examination by the high court.

Furthermore, the petitioners requested that the military be directed to investigate the respondents in the petition and reassign them outside Batangas province.

Members of the UCCP accompanied Julieta Egar, who was the only petitioner present at the Supreme Court, as they held a prayer session outside the court premises.

The Inquirer reached out to Bacarro and Brawner for comment on Monday but they had yet to respond as of 8 p.m. The AFP Public Affairs Office said “We haven’t received yet the formal copy of the petition. In the meantime, we will look at the allegations and will answer in the proper forum.”