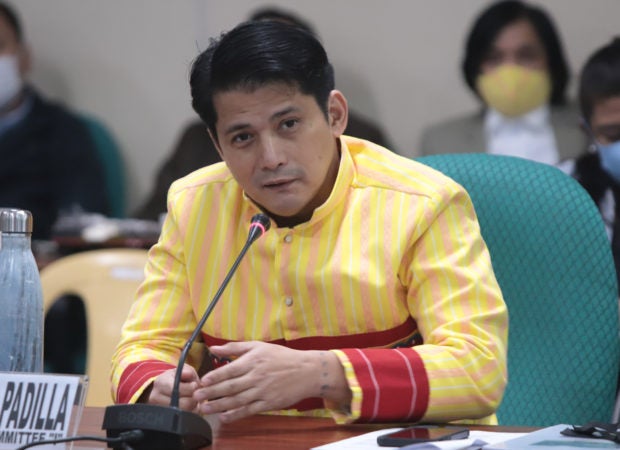 MANILA, Philippines —A “national threat,” in Senator Robin Padilla’s eyes, might be defined as a request for information about the location of the President of the Philippines.”

Last month, the Twitter hashtag #NasaanAngPangulo (Where is the President?) trended when rumors spread that President Ferdinand Marcos Jr. had departed for Japan in the wake of the devastation wrought by Severe Tropical Storm Paeng (international name: Nalgae).

READ: Where’s the president? ‘Not in Japan,’ says Palace

According to Padilla, Marcos was with him in Cotabato during that time.

(How’s that, is there no action on that, Ma’am, on fake news? Because I have been waiting for the statement of the Office of the President because I was with the President, we were in Cotabato at that time when that rumor came out.)

(You should have asked me because we were together. Don’t you have any action on that? Like the NBI said, for me, that’s a national issue.)

After being asked about the office’s approach to press releases, OPS Undersecretary Rowena Reformina said they have been careful in their wording.

Padilla, who presided over the session as head of the Senate committee on public information and mass media, did not appear to be satisfied.

(What can we do about it? Who can file a complaint because that’s a national threat to me? You’re asking where the President is?)

The head of the Department of Justice’s Office of Cybercrime, Angela Marie de Gracia-Cruz, gave a lengthy reply to the senator, enumerating other existing laws to combat the proliferation of fake news.

“So if you’re asking, Mr. Chair, if you have an existing legal framework that can address misinformation or disinformation, the answer is, yes, but the next question is are these laws sufficient? Based on the statements of the NBI and the PNP (Philippine National Police, maaaring sufficient naman po (it’s seemed sufficient nevertheless),” she said.

(Because, Ma’am, what happened is of national interest. I’m sad that no action has been taken.)

(We have a very delicate issue in the BARMM) and the national government. Those spreading fake news were saying the President was not around.)

According to Padilla, typhoon victims thought the president had abandoned them because of the lies they were hearing.

(Why is there no legal action from our government against those who spread that news when it affected the people in the BARMM who thought the President had abandoned them.)

Since this falls under the Revised Penal Code, de Gracia-Cruz said anyone could file a case.

(Anyone can file a case? Can the NBI, the PNP, or the Office of the Press Secretary do it? There’s no need for a private complainant?)

(Even I can [file it] because they disturb the peace process?)

The issue was brought up after an officer of the NBI Cyber Crime, Efren Abantao, explained during the same hearing that there is already an existing law against fake news.

Abantao particularly cited Section 154 of the Revised Penal Code, which penalizes the spread of false news that endangers public order or causes damage to the interest of the state.

But the existing law against fake news is limited, Abantao admitted, adding that it would help to have a new measure that would expand or improve the definition of misinformation and disinformation while providing penalties for violators.