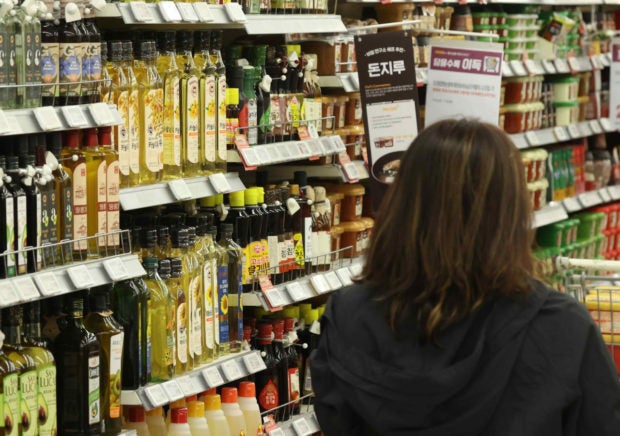 A customer at a supermarket in Seoul on Nov. 7 (Yonhap via The Korea Herald/Asia News Network)

SEOUL — Over the years, the average energy intake of Koreans has been on a decrease. While the consumption of carbohydrates has dropped, protein consumption has increased with changes in dietary habits.

According to the Korea National Health and Nutrition Examination Survey published by the Korea Disease Control and Prevention Agency, the average energy intake by Koreans per day was 2,129 kcal for men and 1,576 kcal for women in 2021. The numbers have been on a consecutive decline since 2015.

The agency explained, the overall diet of Koreans has changed over the years, with less reliance on grain intake such as rice, while meat consumption has increased.

The figures seem to be a reflection of a low-carb, high-fat diet which became popular in recent years among people trying to lose weight or tho seeking a healthier lifestyle.

The numbers show why Koreans’ rice consumption has dropped over the years. Korea’s average consumption of rice per person has been on a decline for in past years.

According to separate data from Statistics Korea, an average South Korean consumed 56.9 kilograms of rice last year, 0.8 kg less than 57.7 kg from the previous year. The consumption of rice has dropped sharply in comparison to 1970, when the average consumption of rice per person was 136.5 kg.

Meanwhile, the intake of vegetables and fruits dropped by 38.7 g and 56.3 g, respectively.

The Ministry of Health and Welfare advised through the Dietary Reference Intakes for Koreans in 2020 that the percent of energy intake from carbohydrates should be between 55 percent to 65 percent, protein between 7 to 20 percent and fat between 15 to 30 percent.

The annual survey is conducted to evaluate the health and nutritional status of Koreans, based on the National Health Promotion Act. It is conducted on 10,000 individuals aged 1 and over, asking them to recount the quantity and variety of food they consumed a day before the survey.