No RITM layoffs amid push for new center | Inquirer News

No RITM layoffs amid push for new center 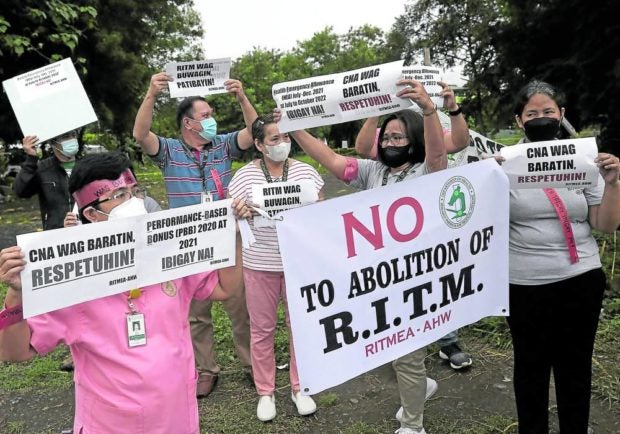 DON’T ABOLISH | Health workers at the Research Institute for Tropical Medicine stage a noontime protest on Nov. 18, against the expected abolition of the 41-year-old government research outfit and their employment termination once the Center for Disease Control and Prevention is established. The health department says that won’t happen. (Photo by RICHARD A. REYES / Philippine Daily Inquirer)

MANILA, Philippines — The creation of the Center for Disease Control and Prevention (CDC) being pushed by President Ferdinand Marcos Jr. will not necessarily lead to the abolition of the Research Institute for Tropical Medicine (RITM), much less the layoff of its staff, according to the officer in charge of the Department of Health (DOH).

The RITM employees last week protested against the expected abolition of the 41-year-old institute once the CDC is established as proposed in more than 40 bills in Congress that seek to create the new health agency.

At a press conference on Friday, DOH officer in charge Maria Rosario Vergeire tried to quell their fears and assured them that “we will not abolish RITM.”

“There also is no truth that there would be some RITM staff who would not be absorbed or would lose their jobs,” Vergeire said.

The RITM has more than 1,000 employees, including doctors, nurses, laboratory technicians, and researchers.

The Senate website listed 10 bills creating the CDC that have been filed since July when the new Congress came in. There were 33 similar measures in the House of Representatives.

Under the various proposals, the CDC will be attached to the DOH as the “technical authority on all matters regarding disease prevention and control.” Among its duties will be developing and maintaining a surveillance system for diseases as well as providing technical guidance on the procurement of vaccines, drugs, and diagnostics.

Also to be established is the Virology Science and Technology Institute of the Philippines (VIP), which will serve as the premier institute to conduct research on all kinds of viruses and viral diseases in plants, animals, and humans.

Romeo Garcia, president of the RITM Employees Association under the Alliance of Health Workers (AHW), last week said the creation of the CDC will result in “widespread displacement, mass layoff and streamlining” of health workers not only in the research institute but also in other health agencies.

He said there were no clear provisions on whether all the health workers in these agencies would be absorbed or transferred.

“What will happen to us health workers then?” Garcia asked.

Citing House bills, AHW national president Robert Mendoza said the CDC would be funded by a public-private partnership, or PPP, which would compromise health services as the CDC would not be publicly financed.

One of the House bills, HB No. 00009 filed by Speaker Martin Romualdez, says in its explanatory note that it seeks the crafting of a modernization program over a period of five years.

The modernization program would entail the acquisition and upgrading of appropriate technologies, laboratories, facilities, equipment, and other resources, plus the acquisition of additional land or location to house the CDC.

Vergeire said the CDC would boost the capacity of “operational planning, clinical research and biological manufacturing” of the RITM.

The offices under the RITM would be integrated into the different centers of the CDC. The clinical research units and biological manufacturing functions, for example, would be absorbed by the Center for Health Evidence of the CDC.

The DOH unsuccessfully pushed for the establishment of the CDC during the previous administration.

One bill, which was proposed by then Sen. Richard Gordon, specifically said the RITM, along with the Disease Prevention and Control Bureau, and the Epidemiology Bureau, would be abolished and their powers and functions, funds, records, equipment, and property would be transferred to the CDC.

Their employees who occupy nontechnical positions would be transferred to CDC.

Vergeire said the DOH will again push for the passage of a law that would establish the CDC and VIP with “stronger backing” coming from the President himself.

In his first State of the Nation Address (SONA) in July, Marcos asked Congress to fast-track the passage of the CDC bill. He said there also was an urgent need to put up the VIP, which would be under the Department of Science and Technology.

The RITM was inaugurated in 1981 under the administration of the president’s father and namesake. It catered to infectious disease patients needing tertiary care. Its functions expanded three years later to include animal research and breeding laboratories.

It was later named the national reference laboratory for dengue, influenza, measles, tuberculosis, malaria, and other emerging diseases.

Over the years, the RITM has been at the forefront of public health issues and emergency response.

At the onset of the COVID-19 pandemic, the RITM served as the lone testing facility in the country that was recognized by the World Health Organization for being capable of detecting the SARS-CoV-2 virus which causes the deadly respiratory disease.

It trained many other laboratories to detect the new coronavirus, enabling the country to conduct its own tests, significantly reducing the turnaround time for getting results.

The RITM was the main testing and isolation facility for suspect, probable, and confirmed cases of monkeypox when the zoonotic viral disease was first detected in the country in July this year.

It was embroiled in the controversy over Dengvaxia for conducting clinical trials on the dengue vaccine from 2011 to 2017. Even until the vaccine manufacturer halted the inoculations in November 2017, there was no recommendation from the RITM to give it a certificate for product registration.