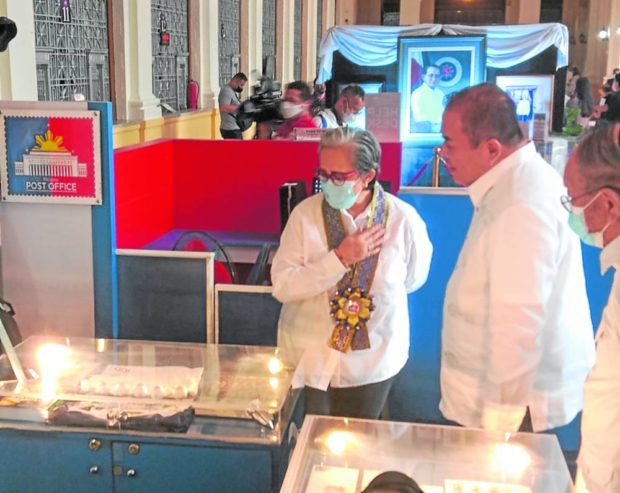 Fulgencio unveiled the new stamp, showing the former president clad in a barong tagalog and a veteran’s garrison cap laden with the medals he received during his colorful career in the military.

The Fidel V. Ramos stamp follows the format for memorial stamp issuances and sells for P12. Only 50,000 stamps were produced, while 2,000 souvenir sheets are also sold at P55 each. These are available at the Philatelic Counter in Manila.

The postal service also inaugurated an exhibit that included Ramos memorabilia, including his stamp collection, at the first floor of the Manila Central Post Office in celebration of National Stamp Collecting Month.

The former president’s daughter, Cristina M. Ramos, attended the event and said her father was a “very enthusiastic stamp collector” and “saw the value of promoting our country through postage stamps.”

Cristina, also known as Cristy, a former national athlete who once led the Philippine Olympic Committee, recalled that when she and her siblings were young, her father had “several thick” stamp albums, which they would peruse.

“Our father would tell us the stamps’ backgrounds,” she said of her father, who has been featured in several stamps issued by PhilPost through the years, including ones that also showed former President Corazon Aquino and Pope John Paul II.

Because of her father, Cristy said she also began collecting stamps and it “served as a vehicle for me to learn a little bit of information about a foreign country.”

She cited that she once learned from a stamp that the native name of the country Poland was Polska.

Stamps, she said, remain one of the “most effective ways” to “sell our country not only among our local citizens but of course to our foreign friends.” 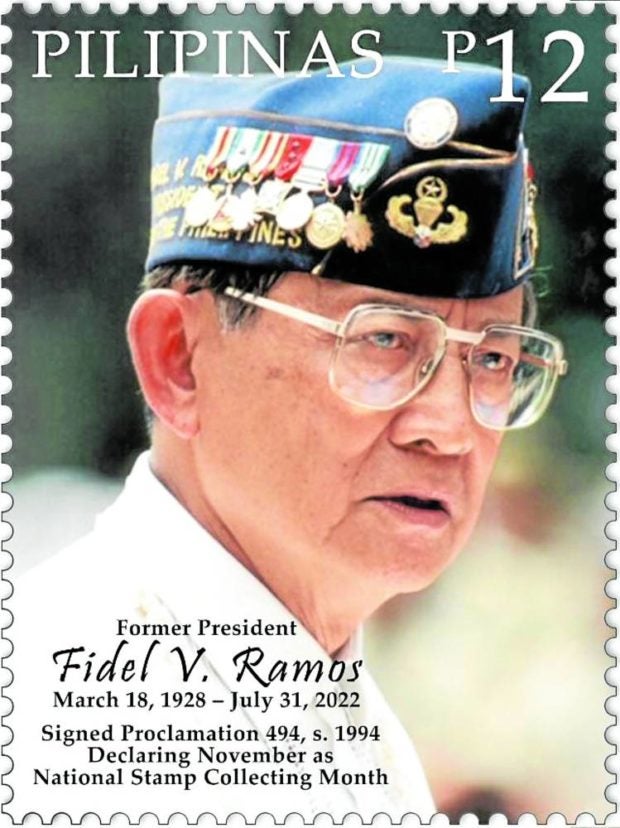 LIMITED ISSUE There will only be 50,000 of this stamp

Philippine Stamp Collectors Society officer Ann Frazias told the Inquirer that many collectors are vying to get the new stamp in their collection.

“[The stamps are] very aesthetic and the design is very good,” she said, pointing out that the stamp souvenir sheet also bears the 1994 Proclamation No. 494 signed by Ramos declaring every November as the National Stamp Collecting Month.

Though the National Stamp Collecting Month will end in Nov. 30, Frazias said the stamp tribute to Fidel V. Ramos shows that philately, or the practice of stamp collecting, is “alive.”

“It is important that now, in this 21st century, [we] still [find] ways to encourage the youth to collect stamps,” she said. “[Stamps are] a connection to the culture, to things that happened.”

“[This is] what’s very beautiful about stamps, [you] can see the world in it [though] it’s just a small piece of paper,” Frazias said.

The postmaster general, for his part, said PhilPost will soon issue postal stamps showcasing the “beauty” of the Philippines.

Dubbed as “Mabuhay Ang Pilipinas,” the stamps are in support of “not only for the tourism but for every religion, food to tourist destinations and so many more,” Fulgencio said.