‘Sorry, we can’t bring you home’ 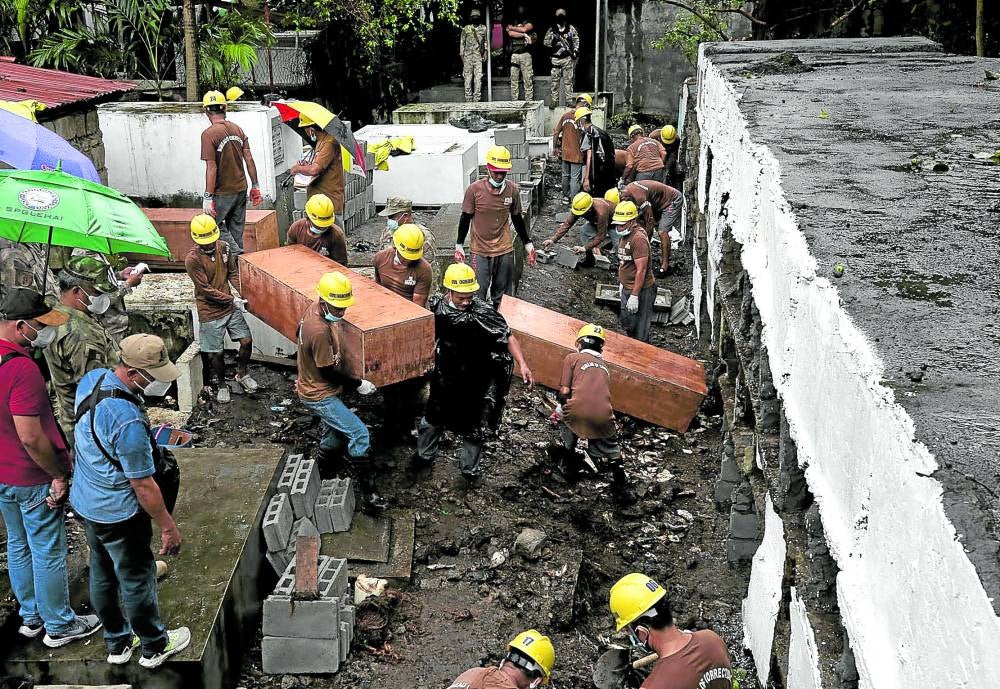 UNCLAIMED Poverty and distance are the main reasons why families are unable to claim the bodies of relatives who died while serving time at New Bilibid Prison in Muntinlupa, including this batch of 60 long-deceased inmates who are entombed on Friday. —RICHARD A. REYES

Joey’s family (not his real name) hadn’t seen him in 10 years. Last they heard, he was making a living as a beautician and enjoying life on the beaches of Palawan or La Union.

Thus it came as a shock to Joey’s sister Mel to learn that her youngest brother had died at New Bilibid Prison (NBP) in Muntinlupa City, where, unknown to the family, he had been serving time for a drug conviction since 2019.

On Friday, Joey, who died at 46, along with 59 other deceased persons deprived of liberty (PDLs), was laid to rest at NBP Cemetery.

Their bodies were among the 176 left unclaimed at Eastern Funeral Services, the sole mortuary authorized by the Bureau of Corrections (BuCor) to handle the dead at the national penitentiary. The bodies started to pile up at the funeral home in December last year.

“I am so sorry we cannot bring you back home,” Mel said, calling out to her brother between sobs. “You know how poor we are, but we will always visit you,” she said as the casket was pushed into one of the multilevel apartment-style tombs.

In a way, Joey was still fortunate; he still had family members present to send him off. As for the other bodies, no relative or friend came.

And so it was the acting BuCor director, Gregorio Catapang Jr., who had to sprinkle holy water on the other caskets.

Poverty and distance are the main reasons why many of the remains were left unclaimed by relatives, according to Corrections Technical Senior Supt. Ma. Cecilia Villanueva, director of BuCor’s health and welfare services.

“Very rarely would a family member come here to retrieve the bodies of the PDL. Most of the time, they would only get the death certificates … but would not claim their loved ones and just let the bureau provide for the interment. That’s why the bodies accumulate. We do not want this to happen,” she said.

“Many of them came from faraway provinces across the sea, and they tell us they have no means to transport their dead relatives. And the BuCor has no budget to ship these bodies back to their hometowns,” Villanueva told reporters. 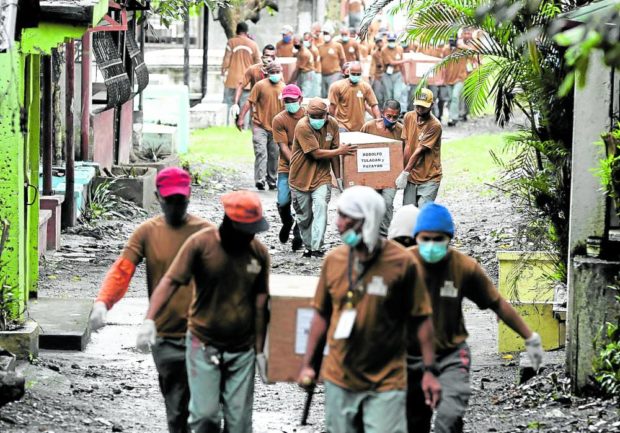 BODIES OF EVIDENCE Friday’s mass burial brings the number of deceased prisoners interred at New Bilibid Prison Cemetery to 70, after the first 10 who were buried on Nov. 9. Another 60 bodies will be buried next week, as they could no longer be subject to an autopsy due to their advanced state of decay, some of them even appearing “mummified,” officials say. —RICHARD A. REYES

In Joey’s case, his family resides in Quezon City, about 30 kilometers from Muntinlupa.

Still, his two sisters almost never made it to the ceremony, panting as they chased the line of pallbearers carrying the wooden caskets. They searched until they found their brother’s, thanks to the name scrawled in marker pen on bond paper and taped to one side of the box.

Yet in the end, they were not allowed to see their brother for one last time.

Joey was pronounced “dead on arrival” at NBP Hospital on Oct. 17. The cause of death, according to the death certificate given to his sister, was chronic obstructive pulmonary disease, secondary to malnutrition and diarrhea.

His relatives learned of his demise almost a month after the fact, in a letter they received on Nov. 12.

Friday’s mass burial brought the number of inmates interred at NBP Cemetery to 70, following the first 10 who were buried on Nov. 9.

Catapang said 60 more bodies, already in advanced stages of decay, would be entombed next Friday.

Justice Secretary Jesus Crispin Remulla gave the go-signal to bury the first batches of bodies, as they could no longer be subject to an autopsy because of the “advanced state [of decomposition],” with some even appearing “mummified.”

No one has been held accountable for the pileup of bodies at NBP. But Remulla said he was not discounting the possibility of exhuming the buried remains should any indication of foul play or other ground for a criminal complaint arise from the investigation.

The discovery of the bodies at the NBP-sanctioned funeral home came by accident during investigation by the National Bureau of Investigation of the murders of journalist Percival “Percy Lapid” Mabasa and an alleged middleman Cristito “Jun Villamor” Palaña, a prisoner at NBP.

NBI agents went to Eastern Funeral Homes for the autopsy on Palaňa and found 30 bodies in the morgue. It turned out the corpses of 176 PDLs had been left in their care since December 2021.

The Department of Justice requested forensic pathologist Raquel Fortun to examine the bodies but the expert said only 50 of them were suitable for autopsy.

Those bodies were to be examined at the University of the Philippines College of Medicine in Manila with results expected in a month.

According to Villanueva, 39 of the 176 corpses had already been autopsied by the NBI upon BuCor’s request.

Most of them are believed to have died of acute myocardial infarction, or heart attack, pneumonia, and cardiorespiratory arrest or the sudden loss of breathing and heart function.

“Many of these deaths are of natural causes, considering the aging population of and the congestion rate [of NBP],” Villanueva said.

NBP could only do so much after providing the necessary health care for them, she said.

One of the world’s largest megaprisons, NBP houses a total of 29,204 PDLs in a facility intended only for 6,435 people.