In Tarlac, ‘Belenismo’ offers visual treat to the pandemic-weary 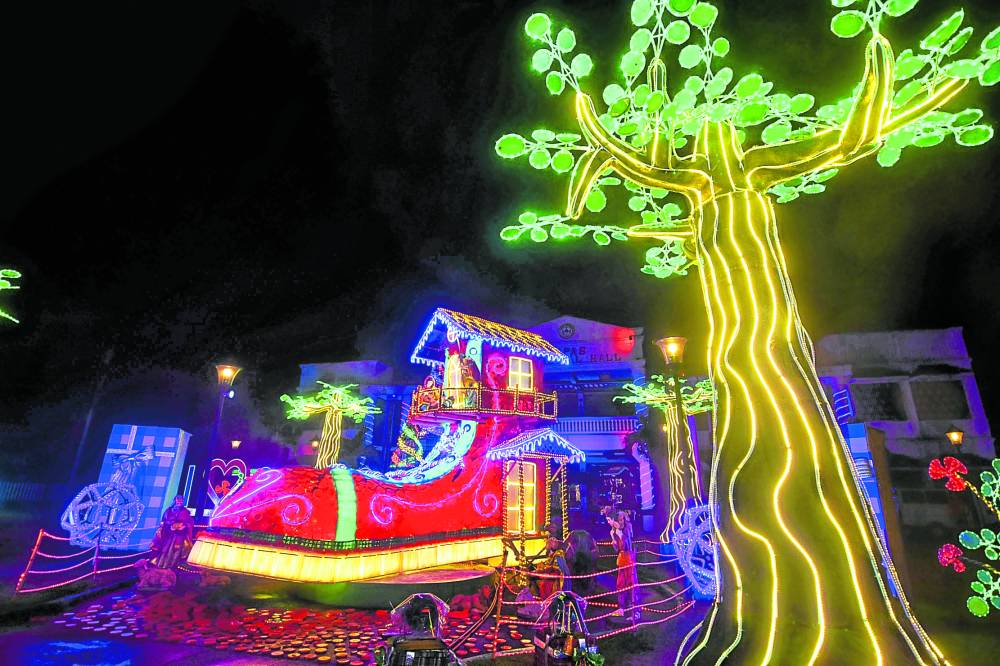 LARGER THAN LIFE A display of colorful and festive lights in a massive diorama depicting the Nativity scene is an early holiday attraction in Tarlac province, the country’s “belen capital.” Among this year’s participants in the annual “Belenismo” is Capas town, which created the 6-meter-high belen featuring a house boot, complete with shoelaces and windows, to symbolize “protection” since pandemic front-liners usually wear a pair of boots or shoes. —WILLIE LOMIBAO

TARLAC CITY—For nearly a month now, festive lights from 51 “belen” (Nativity dioramas) have been illuminating the roads of Tarlac province, giving residents and passersby an early visual treat ahead of the holiday season.

Now in its 15th year, the Belenismo Festival among various groups in the province continues to draw crowds wanting to step away from pandemic-induced restrictions.

The display of lights, which is a mix of competition and spiritual advocacy, is held annually as a continuation of a 2007 initiative of the late Rev. Fr. Alex Bautista, who was also an architect, with the support of the Tarlac Convention and Visitors Bureau and Tarlac Heritage Foundation.

In 2010, the Department of Tourism declared Tarlac the “belen capital” of the country after a series of successful stagings of the event.

This year’s participants have put up their own versions of Nativity scenes since Nov. 4, most of which featured Filipinos’ resilience amid the coronavirus health crisis while highlighting the birth of Jesus Christ.

According to the organizers, the belen makers would compete in various categories, including municipal, nonmunicipal, church and community.

Among the entries this year is a giant diorama from Moncada town, which featured a woman embracing the Holy Family inside a medieval wooden bucket made of “bical” bamboo.

Named “Arakop Moncada” (from the Ilokano word “arakop” or embrace), the town’s 30-foot-tall belen showed “how our residents embraced challenges and new life with strength, hope and faith in God, especially when the pandemic started,” Mendoza said.

Found below the Nativity scene is a lotus flower made from metal sheets, symbolizing the townfolk’s “strength and resiliency,” he added.

Moncada’s entry was designed by Christian Derik Aquino, a 22-year-old medical student, who is among this year’s youngest designers. The town has been previously named “Hall of Famers” in the contest.

In Capas town, the Nativity scene was set up inside a “house boot,” covered by lids of plastic wares that were painted red and glued together.

Jessie Dizon, the designer of the Capas belen, said the 6-meter-high house boot, complete with shoelaces and windows, is a symbol of protection since boots are usually worn by pandemic front-liners.

“The boot is also a representation of the next step we’re going to take toward the new normal,” he added.

Dizon used recyclable materials, such as old swivel chairs from the municipal hall, egg trays and old tires, to decorate the belen.

In San Clemente town, a huge hot air balloon made of 5,000 plastic bottles served as the centerpiece of the Nativity scene. The infant Jesus could be seen riding the hot air balloon basket, while Mary, Joseph and the three “wise men” stood on both sides and were surrounded by weaved bamboo and palm tree leaves.

The municipality won seven championships and was installed in the Hall of Fame for displaying massive dioramas made of indigenous materials commonly found in San Clemente.

A candy land-themed belen featuring a giant J-shaped candy was the entry of the Armor Pambato Division from the Armed Forces of the Philippines.

The AFP’s belen inside Camp Servillano Aquino at Barangay San Miguel in the capital city of Tarlac is competing for the grand nonmunicipal category. The J-shaped candy served as “a reminder that Christmas is all about Jesus,” according to its makers.

They said a unique feature of the AFP’s belen is a playground inside a castle-like structure where children could play, emphasizing that “Christmas is for children, a magical time of the year.” Vice President Sara Duterte visited the military’s belen on Nov. 16 and read stories to schoolchildren from the different towns of the province.

The Tarlac State University, a first-time contestant, has displayed a Nativity scene called “Belen ng Karunungan (Nativity of knowledge),” which was inspired by the university logo. It featured two open hands carrying the Holy Family, symbolizing “a person ready to uphold and protect the state,” said its designer, Oscar Ubusan Jr.

In the church category, Bamban town’s Sto. Niño Parish recreated the Nativity scene under a “diamond crystal” to symbolize “strength, love and health” while that of Catherine of Alexandria Parish in Gerona town, which drew inspiration from the Pahiyas Festival of Lucban, Quezon province, was made of rice stalks, dried tall grass and bamboo.