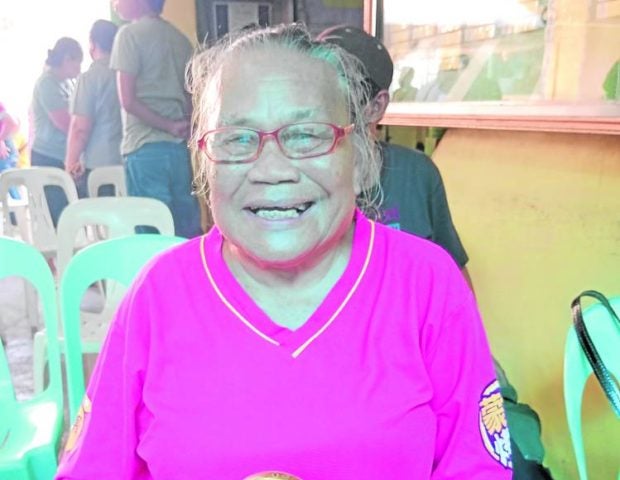 HAPPY FACE After waiting for 34 years, Dolzura Exchaure, 83, will finally be issued a land title in December this year by the Department of Agrarian Reform. She joined the raffle of individual lots for agrarian reform beneficiaries of the 3,150-hectare oil palm plantation in San Francisco and Rosario towns in Agusan del Sur on Nov. 23. —CHRIS V. PANGANIBAN

SAN FRANCISCO, AGUSAN DEL SUR—Former workers of NDC-Guthrie Plantations Inc. (NGPI), a vast Malaysian company-ran palm oil plantation based in this town of Agusan del Sur province, will have a reason to celebrate this Christmas.

After 34 years of waiting, they will finally own individual titles for a parcel of their former employer’s landholdings, earlier distributed to them under the Comprehensive Agrarian Reform Program.

Among the farm workers, Dolzura Exchaure, 83, said she couldn’t wait to get hold of her individual land title that the government promised to release to her by the second week of December. She was still 49 years old when then President Corazon Aquino awarded to more than a thousand farm workers like her the collective ownership of the former plantation land on Dec. 13, 1988.

Back then, the agrarian reform beneficiaries (ARBs), who included plantation workers here and in neighboring Rosario town, organized themselves into NGPI Multi-Purpose Cooperative, from whom NGPI continued to rent the palm oil lands after it was turned over to the former farm workers-turned-ARBs.

In November 2013, however, the company decided to turn over the plantation to the cooperative when the latter continued to demand higher land rentals.

The cooperative later splintered into five groups because of infighting, prompting ARBs to avail of the Support for Parcelization of Individual Titles project of the Department of Agrarian Reform (DAR), which aimed to distribute some 1.38 million hectares of land in the country to individual beneficiaries. The DAR’s individual titling project is funded by a P24-billion government loan from the World Bank.

Last Wednesday, Exchaure was among the 149 ARBs who took part in the raffling of the individual surveyed lots within some 400-ha area of the palm oil plantation. They belong to the Maligaya ARB Cooperative (Maarbco) who will have an average surveyed areas ranging from 1.9 ha to 2.8 ha.

Jamil Amatonding, Jr., the Provincial Agrarian Reform Program Officer II of the DAR in Agusan del Sur, said Maarbco members and four other splintered ARB cooperatives were supposed to be given individual certificate of land ownership award (CLOA) before the end of President Rodrigo Duterte’s term in June 30 but it did not pushed through due to the delay in the release of funds.

To make the assignment of lots for ARBs fair, they decided to hold the raffle.

He said he and the original farm workers who were issued the collective CLOA in 1988 were each awarded 2.8-ha while the new ARBs will have 1.9 ha.

Edilberto Bayotlang, 69, and former gardener at the mansion of the plantation’s British managers, said he was so happy that he finally had a land to bequeath to his three grown up children.