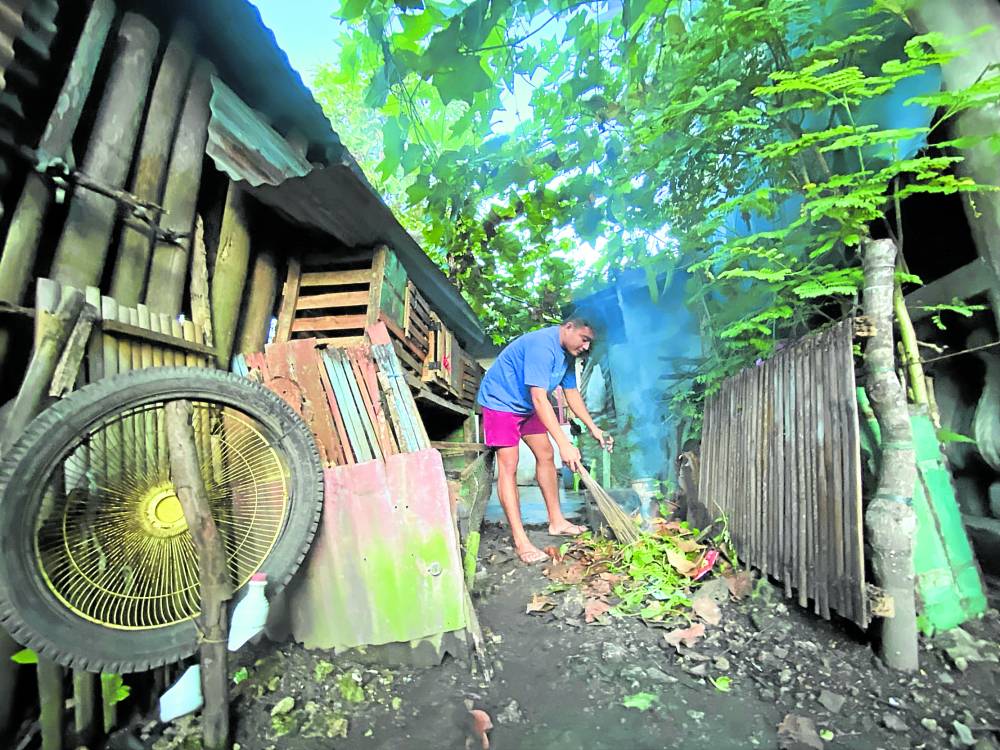 CLEANUP A resident of Barangay Booy in Tagbilaran City, Bohol, cleans the surroundings of his house on Friday to ensure that breeding spots of dengue-carrying mosquitoes are destroyed. —LEO UDTOHAN

TAGBILARAN CITY—The cases of dengue fever in two major cities and a province in the Visayas have skyrocketed this year compared to 2021.

The cities of Bacolod in Negros Occidental and Tacloban in Leyte and Bohol province logged high numbers of dengue cases between January to November, prompting their respective local governments to level up their campaign against the mosquito-borne disease.

The number was 1,198.3 percent higher than last year’s 175 cases and one death, according to the Provincial Epidemiology and Surveillance Unit under the Provincial Health Office.

In Bacolod City, the mosquito-borne disease killed 13 persons and affected 939 others, which was 191.6 percent higher than last year.

Local health officials stressed the need to search and destroy all breeding and nesting places of mosquitoes and for those showing symptoms of dengue to seek early treatment and to stay hydrated with water, especially if one has a fever.

In Tacloban City, dengue cases rose to 443 as of Nov. 19, based on the records of the City Health Office (CHO). The number is 550 percent higher compared to last year’s 56 cases.

At least three city residents died due to dengue in 2022, the Tacloban CHO said.

Mayor Jane Yap of Tagbilaran City, the capital of Bohol, has announced on Monday a plan to activate the anti-dengue task force in the villages.

“We want to facilitate information drives on how to prevent the spread of dengue among residents,” she said.

Dengue, an infection caused by the Aedes aegypti mosquito, has no known cure. The infection triggers a severe flu-like illness often followed by a severe drop in an infected person’s platelet count.

Among other symptoms are severe headache, pain behind the eyes, full-body aches, nausea, vomiting, swollen glands or rashes.

She said some municipalities lack preventive measures against dengue, which included awareness campaigns among its residents and regular cleanup campaigns.

Health officials called on the public to clean their surroundings to lessen the number of dengue-causing mosquitoes.

The suggested approaches included massive and intensive information, education and communication campaigns in the villages, regular surveillance by local dengue task force at least once a week, lobby support from the Department of Interior and Local Government, encouraging community vigilance, and mobilizing search and destroy programs.