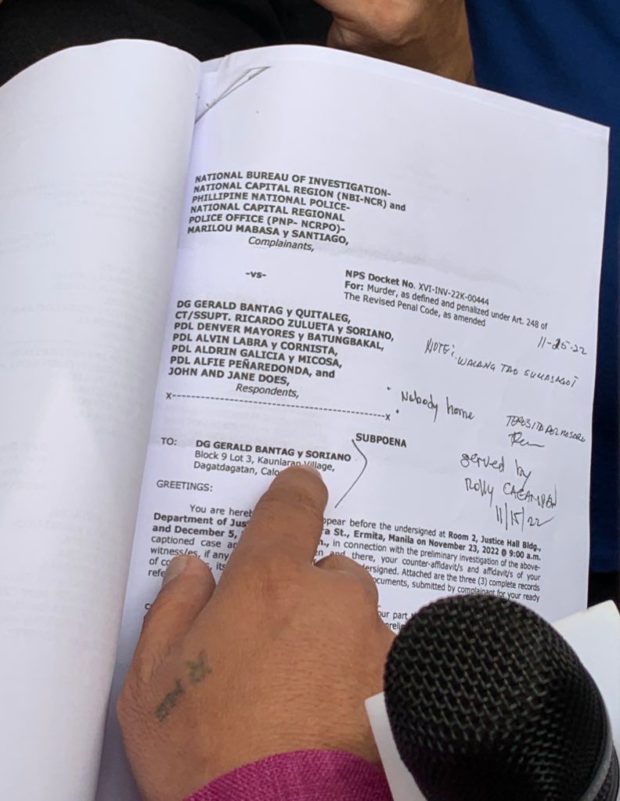 This photo shows a copy of the subpoena for suspended Bureau of Corrections Director General Gerald Bantag. INQUIRER.net/Tetch Torres-Tupas

MANILA, Philippines — There was a mistake in the subpoena sent by a Department of Justice (DOJ) panel of prosecutors to Bureau of Corrections (BuCor) Director General Gerald Bantag, his lawyer Rocky Balisong said Wednesday.

He said the subpoena was addressed to a certain Gerald Bantag y Soriano. However, the suspended BuCor chief’s middle name is “Quitaleg.”

The error, according to Bantag’s lawyer, “is fatal.”

“That is fatal because it refers to two different individuals. Definitely, Gerald Bantag y Soriano is not our client,” he added.

Senior Assistant State Prosecutor Charlie Guhit said not even a lawyer appeared on behalf of Zulueta.

On the other hand, the New Bilibid Prison (NBP) inmates under the custody of the National Bureau of Investigation (NBI) appeared via video conferencing.

Guhit said they allowed video conferencing for the inmates for security purposes.

“This is not an easy process,” he said.

The next preliminary investigation is set on December 5.

Bantag, Zulueta, and several others are facing complaints of murder for the death of Lapid, who was killed in an ambush last October 3 in Las Piñas City, and NBP inmate Jun Villamor, an alleged middleman who supposedly contacted Joel Escorial to gun down the broadcaster.

Villamor died inside prison on the same day Escorial appeared before the media to give details on Lapid’s death last October 18.