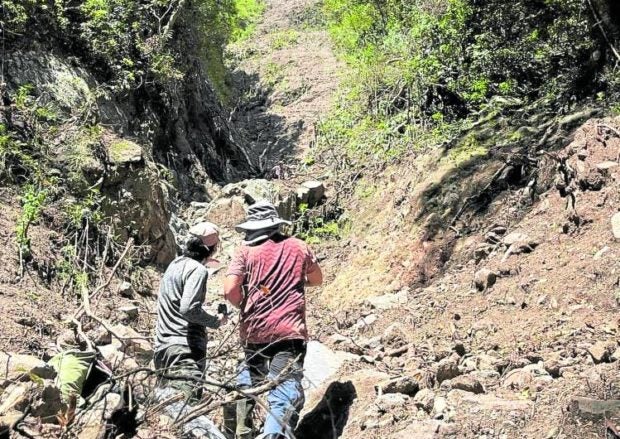 SAVING LIVES The Department of Public Works and Highways is working to minimize the hazards of rockslides and landslides on Mt. Arayat, where boulders and other debris are lodged in creeks. —MINES AND GEOSCIENCES BUREAU CENTRAL LUZON PHOTO

CITY OF SAN FERNANDO, Pampanga, Philippines — The Department of Public Works and Highways (DPWH) will install debris flow barriers on Mt. Arayat before the onset of rains in 2023 to avert rockslides and landslides toward Arayat and Magalang towns in Pampanga province and reduce harm to communities at the foothills.

Public Works Secretary Manuel Bonoan announced the quick-fix solution on Monday after he approved the request of Pampanga Gov. Dennis Pineda and Pampanga Rep. Aurelio Gonzales to fund and implement engineering interventions on the inactive volcano that stands at 1,034 meters.

Bonoan pledged an initial P100 million from the agency’s emergency funds to set up and maintain a series of debris flow barriers along Sapang Maeyagas, Sapang Oliva, Sapang Madalumdum and Sapang Takwi.

Landslides starting in 2009 had killed 13 people in the area.

The erodible materials, largely rocks, on those creeks after Supertyphoon “Karding” (international name: Noru) and Severe Tropical Storm “Paeng” (Nalgae) totaled 324,043 cubic meters, according to the data presented by the Mines and Geosciences Bureau in Central Luzon during a meeting with Bonoan at the DPWH central office in Manila.

During the aerial and ground surveys on Nov. 10, two gashes from the summit were confirmed to have taken place in the area.

Close to 2,100 households live in Purok 4, 5, 6 and 7 of San Juan Baño, which is in direct harm’s way, Soriano said.The Department of Environment and Natural Resources (DENR) has also allotted P42 million in 2023 for programs making Mt. Arayat a protected landscape through a law sponsored by Gonzales, DENR regional executive director Paquito Moreno Jr. said at the same meeting.

Arayat residents have been informed of the hazard, while their houses were tagged for priority assistance.

The provincial government has distributed “emergency go bags” and food packs, established alerts and warning for preemptive evacuations, and prepared two evacuation sites in anticipation of the looming rockslides.

Also part of the preventive measures were massive bamboo planting and strict monitoring of slope farming.

“The severity of the problem not only needs engineering measures but also social and environmental solutions,” Bonoan said.