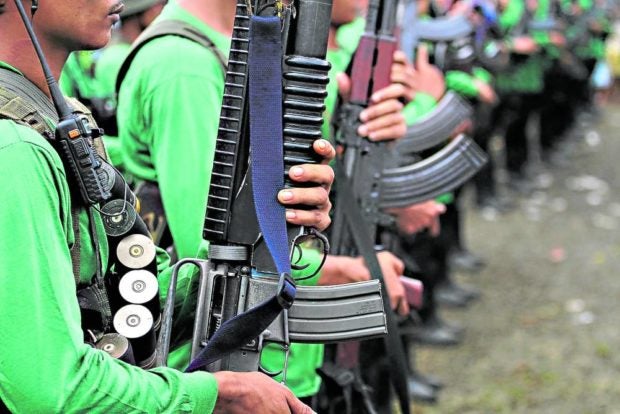 TACLOBAN CITY — At least 18 assorted firearms were surrendered by a former rebel to Army officials in Samar on Sunday, November 20.

The cache of firearms was surrendered by a certain “Aljur” to Col. Juanito Parazo Jr., the commanding officer of the 46th Infantry Battalion based in Calbiga town, Samar.

Based on the battalion’s report, the firearms were buried by the rebels in Barangay Sinalangtan, a remote village of Calbiga which was once under the influence of the communist armed group, the New People’s Army (NPA).

Captain Ryan Layug, the spokesperson of the 8th Infantry Division based at the Samar provincial capital of Catbalogan City, said that the surrendered cache of firearms will undergo some “technical inspection.”

“Part of the technical inspection is to determine if (these firearms) came from our inventory and how we lost (them),” he said.

Layug also said that all these recovered firearms will be decommissioned as part of their standard operating procedure.

“Among the types of firearms recovered, only the M16 rifle is being used by the AFP,” he said.

Last August 20, Lt. Gen. Bartolome Vicente Bacarro, Armed Forces chief of staff, led in the decommissioning of 65 firearms either surrendered or captured by the government troops from the NPA members in the region.

Aljur, who surrendered on November 19, was a part of the Squad 3, “Bugsok” Platoon of the communist group operating in the towns of Sta. Rita, Pinabacdao, and Calbiga.

The former rebel disclosed that he has two brothers who were still connected to the NPA. He urged them to return to the folds of the law.

Parazo welcomed the decision of Aljur to surrender together with the firearms.

“We sincerely thank him for abandoning their wrong ideology and embracing the government’s program to achieve peace,” he said in a statement.

For his part, Col. Lenart Lelina, the commanding officer of the 801st Infantry Brigade based in Hinabangan town, also in Samar, vowed to help Aljur by providing him all the benefits he is entitled to receive as a surrenderee.