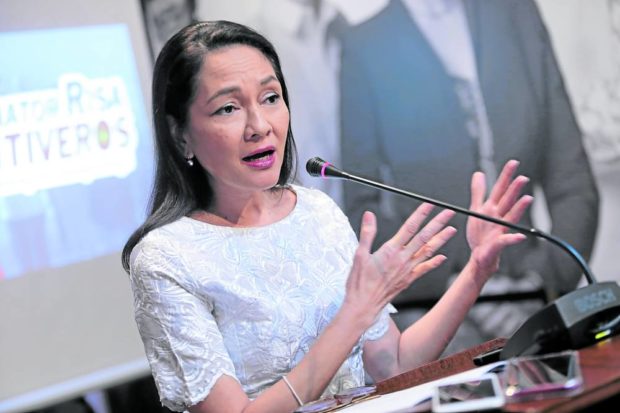 (Revised to reflect a statement from Linconn Ong’s lawyer)

MANILA, Philippines — Senator Risa Hontiveros has claimed that the Chinese mafia is planning to establish a team of Filipino scammers in Myanmar, and has even suggested that this organization may be affiliated with Pharmally Pharmaceutical Corp.

Hontiveros made the disclosure after 12 Filipinos working abroad were saved from a human trafficking ring said to be based in China and operating in Myanmar on a massive scale. The senator said that Filipinos were being considered for their English skills.

(The biggest information that was shared with us by one of those rescued, and this should also serve as a warning to our government agencies and to our countrymen here in the Philippines: There is a brewing mischievous plan by this Chinese mafia to form an all-Filipino team of scammers in Myanmar and other areas because of our English proficiency.)

“This is why I stand before you today because this is of extreme importance and urgency,” she added in her privileged speech.

The opposition senator then mentioned a likely link between the mafia and Pharmally, which was under scrutiny by legislators for supplying the government with allegedly overpriced medical supplies.

“Lastly, in a disturbing development, we also found out that the exact area where they were, Shwe Kokko Special Economic Zone or Yatai New City, owned by Yatai International Holdings Group – a hub described as a ‘safe haven for online gambling and fraud operators’ – may possibly have a connection to the Pharmally players,” said Hontiveros.

To recall, Linconn Ong is the director of Pharmally.

Meanwhile, according to Hontiveros, Yatai International Holdings Group owner She Zhijang, arrested last month in Thailand, has multiple commercial interests in the Philippines.

“These links must be brought to light and further investigated,” she stressed.

The camp of Ong urged Hontiveros to “take a second look at her pronouncements.”

“The use of the said generic term does not necessarily signify any business connection between or among those using the same or similar business name,” Topacio told INQUIRER.net in a message.

In addition, Hontiveros cautioned the general public to be wary of communications from unknown senders.

She warned that advertisements for jobs abroad that specifically seek Filipino workers are widespread on the internet.

Human trafficking victims are subjected to “sexual and romantic relationships” online in an effort to convince their clients to invest and prevent physical harm, Hontiveros added.

(The text messages that OFWs receive when they do not get a client are not a joke.)

(Aside from overtime, they are threatened to do 1,000 squats, carry pails of water, be whipped with an electric baton, be thrown, and be stabbed until they die.)

Hontiveros called on the Department of Justice and the Inter-Agency Council Against Trafficking to look into the matter.

She also urged the Department of Migrant Workers (DMW) to launch a national information drive against scam job offers online.

The senator likewise asked the DMW, Overseas Workers Welfare Administration, and the Department of Social Welfare and Development to provide assistance to trafficking victims.

The National Bureau of Investigation and the Philippine National Police Cybercrime Divisions were also pushed to probe and track down the administrator of Facebook pages and Telegram groups that are involved in such operations.